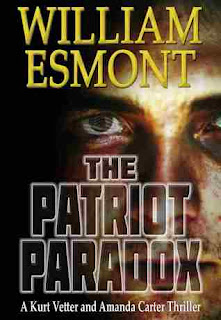 The last thing Kurt Vetter expected to hear was that Mike was dead. Since he was on a vacation trying to recover from the death of his wife and daughter this was not good news. His older brother, the one who “played by the rules”, worked in Washington and the one Kurt had always looked up to – gone. Stranger than that was the manner of death, run down? In the ‘burbs? Not likely. The more Kurt pokes the worse things get until, with very secret documents that had been mailed to him minutes before Mike’s death in his possession; he travels to England to the one person Mike thought could help.


Paranoid secret agents, a plot to end it all for one messed up country. What had Mike been killed for and why are people trying to kill Kurt for Heaven’s sake. The one person who might be able to help, Amanda Carter is polite but more secretive than Mike had ever been. Can Kurt trust her or is she in on the whole thing?

I reviewed William Esmont’s first book, Fire: Elements of the Undead last year. It was a great read but this tale, this story outdoes it by far. The plot is impressively written, the characters make you hope that this isn’t just a one book thing and it was good to read something done so well.