Deliver Me From Temptation 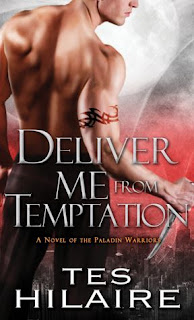 Logan Calhoun’s dad is the Big Kahuna in Haven. Which means what he says goes. Period. Dad hates vampires, humans and most things in between. He isn’t even horribly fond of his own daughter because she’s bonded to a vamp and is half-vamp herself. Why is dad such a grunch? Haven is a place on its own plane of existence between Heaven and Earth. The only inhabitants are the Pallidans, angels who volunteered to seek out Lucifer’s spawn make send them home.


Jessica, hot shot detective, stubborn as Logan and twice as cute is after a killer. Doesn’t really matter which one although the bums who killed her sister would be good. She’s been looking for them for over a year with no luck. No, instead of killers, every time she turns around she bumps into Logan. A prime suspect in several rapes – at least in Jessica’s mind. While she is positive he’s involved she’ll never guess how.

Logan and Jess circle each other for a long time. She is involved with another cop. He doesn’t get serious because he’s immortal and, well, seeing your lover dies while you’re still the hunk you always were is a bit saddening, don’t you think?

Lucifer has made a big play in the city, lots of incubi and succubi and just plain ugly demons wandering around. They’re much badder than Jessica only no one thought to mention it to her. She goes off to do right and ends up ….well on her butt, actually!

This was a good story. Not one of my favs this year but the plot was good and the “get togethers” were yummy so no complaints.