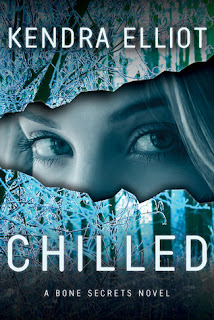 Alex Kinton is a formal marshal. He has joined a search and rescue (SAR) team under the pretense of helping them check for any possible survivals in an airplane crash. Alex has other plans of his own. The airplane was a federal plane and it was transporting a dangerous serial killer. A man that Alex has obsessed about and lost his job over.


Brynn Nealey is a medical examiner and a team member of SAR. In the beginning, Brynn can not stand Alex but the more time that she spends with him, the more he grows on her.

Chilled is the second of the Bone Secrets novels. The first is Hidden. I did read Hidden but I have to say that by far Chilled is way better. I connected with the character more and the story line was more interesting. However, just like the first book, the romance does leave a lot to be desired. It is like the author wants the books to be romantic suspense books but she does not go all the way with the romance. She just teases some with the romantic build up with little interaction and then the two characters end up with each other in the end. So in this regards, I was not feeling the romance, even if I thought that Brynn and Alex made a good match. Brynn could hold her own with the guys. In fact there was a time or two where she put the guys including Alex in his place. Hopefully the third book keeps up the trend of this book and is exciting.