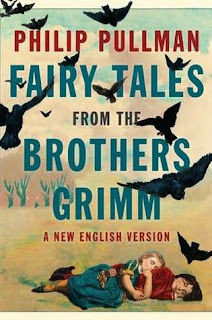 I enjoyed this Mr. Pullman’s “New English Version” of the famed classic Fairy Tales from the Brother’s Grimm. There were actually quite a few stories that I had not heard read before. So this was a nice surprise. What I liked about this collection was that Mr. Pullman tried to stay as true and accurate to the original telling of the stories from the Brothers Grimm. What I found the most intriguing were the references at the end of each tale as to the origin and what the tale represented.

It is amazing to see the adaptation that other writers have taken with the fairy tales like Walt Disney. I know that changes are made for the movies as the movies have to be exciting and grand but to see the differences from the original to the ones that readers remember today as the “classic” is as I said before interesting. I thought that some of the tales were darker then what they have been portrayed. Also, the stories that the Brothers Grimm wrote actually carry more meaning then just coming off as silly fairy tales with happy endings. Readers will have an enjoyable time reading these tales from Brother’s Grimm and Mr. Pullman.