What the Heart Remembers is a spell bounding read! 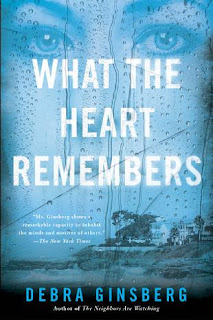 Eden Harrison used to love running. She also loved her fiancé, Derek. That stopped when Eden required a heart transplant. Now, Eden is a changed person. Even since her transplant, she has been experiencing strange visions. Although the visions are like from scenes of another life she lived.


Darcy Silver recently lost her husband. In a strange consequence, Darcy also lost her lover. When Darcy meets Eden she feels an instant connection towards her. Eden and Darcy will soon discover just how close they really are.

I found this book to be read-worthy. The premise of it was what had my attention. While, the characters were nice it did take me time to warm up to them, especially Darcy. In the beginning I found Darcy to be cold and emotionally detached. Where as with Eden she did have the whole transplant and visions thing going for her. Otherwise, I did find her boring as well in the beginning. As the story progressed it did get better. Then there was a lag during part 2 when things slowed down but part 3 picked up again and stayed steady until the end.

I quickly figured out whose visions Eden was having so there were no surprises there. However, this book was not so much about the element of surprise as it was about the story and the connection between the characters. Overall, this was a nice first introduction for me to this author. What the Heart Remembers is a spell bounding read!


What was your inspiration for What the Heart Remembers?


I’ve long been interested in the idea of cellular memory and even longer fascinated with the idea of waking up one day and feeling like someone else. But these two ideas didn’t really coalesce into a story until I was working on the draft of a completely different novel. This actually happens to me with some frequency—I’ll be pretty sure I know what I want to write and while I’m struggling through it, the idea for something else will emerge fully formed. So I was trying to write a domestic scene—I think it was an argument between a husband and wife—and having a real problem with it, just not liking it at all and suddenly I had this vision of these two women (and they dropped into my head with names; Darcy and Eden), neither who she seemed to be on the surface, and the rest of it all fell into place.

Did you do any research to prepare for writing What the Heart Remembers?

I did. I searched online for newspaper and journal articles about cellular memory and found some very interesting articles; mostly personal stories of people who’d had transplants and had experienced feelings of connection with their donors. I also read a couple of very informative books on the subject; one a memoir by a woman who’d had a heart/lung transplant and one a compilation of anecdotal findings on cellular memory. Finally, and most importantly, I interviewed several doctors and nurses, all of whom were extremely generous with their time and provided invaluable information.


How long did it take you to write What the Heart Remembers?

I had a very different writing schedule with What the Heart Remembers than I usually do. I worked on the first 80 or so pages for about three months, but then, due to a family emergency and other circumstances beyond my control, I was unable to get back to it for several months after which time it became a now-or-never type of proposition. I ended up writing about two-thirds of it in about 8 weeks. It was a crazed summer; I was writing for about 14 hours a day. It wasn’t pretty.

How important is organ donation to you?

Do you believe that people do share a connection with their donor?

I don’t see how it’s possible not to share a connection. On the most basic, physical level, a piece of one person’s body resides in the body of another after a transplant—on that level the connection is inescapable. But I do believe that there is a stronger connection than that between a donor and a transplant recipient. Evidence and proof of cellular memory is still anecdotal, but I have no doubt that one day (sooner rather than later) it will be proven scientifically as well.

What is one thing that you want readers to take away from this book?

First and foremost, I want readers to be engaged and entertained (and—my fondest wish—thrilled). The mark of a great read for me is when I want to simultaneously skip ahead so I can find out what happens (I don’t) and slow down to make it last longer (I can’t); a delightful dilemma and one I always seek to create for my readers. Beyond that, I would consider myself very successful if I am in some way able to allow readers to view an idea (in this case the connections between people) in a d