Tributary and hanging with Barbara Richardson 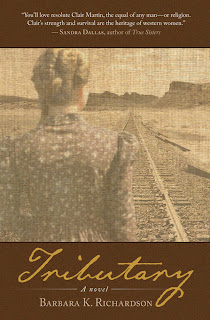 Thirty years of Clair Martin’s life make up the pages of Tributary. A life of scorn, preaching, pain, suffering and justification, all told in first person by Barbara Richardson. Born with a large birthmark, Clair’s mother left her in Utah while very young. She was passed off by the Mormons to various people in the Church who were in need of help. No one helped Clair, it was up to her to make it or not. She got encouragement from one widow for her lovely flower cards which she sold for spending money.


She is nearly raped by a son of one of the Church elders and decides it is time for her to leave Utah for points South and East. She lands in New Orleans where she becomes a laundress in the colored ward of a local hospital. She falls in love with a little boy she names Tierre (“T”). He’s back and she’s not but it doesn’t matter to Clair because he becomes the son she cares for and raises to read, study and work hard. They decide, after receiving a long letter from the widow, to return to Utah and go North to a sheep ranch owned by the lady’s son, Stephen.

There’s nothing in northern Utah and not much in Clair’s soul when she finds, ultimately, that Stephen has converted to Mormonism and already has two young wives. He wants a third – Clair – but she won’t give in.

Through the 1850’s to the 1880’s, Clair and her friends, enemies and T travel dirt roads by foot, wagon and horseback to learn what God and Brigham Young have in store for them. The scenery is so well described that I could see it with my eyes closed and living in New Orleans in the 1870’s! There must have been nothing like it.

An outright wonderful story by the author of Guest House and one you should take the time to read slowly to enjoy the moods and thoughts of a self-made woman dealing in a world of men.

1. What is it like to live in one of the "greenest" places in Colorado?


Boulder is immensely blessed with green spaces and the zoning to protect them. I live two blocks from South Boulder Creek which runs wild through a field of cottonwoods, elms and willows, among waist-high flowers all summer long. I walk there every day. I’m not a happy camper without wildlife neighbors. I’ve seen kingfishers, flickers, herons, hawks, peregrine falcons and one large mottled owl on the banks of the creek. Also a snake, a frog, hundreds of dogs and my old friends milkweed, lupine, bladder campion, wooly mullein and snowberry who are visited by bees, butterflies, dragonflies and mosquitoes. I love it here.


2. Who was your favorite author growing up and why?

My favorite popular author was Anne H. White who wrote Junket, the tale of a busy farm dog whose family abandons him to the clueless care of the citified newcomer McDonegal clan. This novel made me long to have an Airedale Terrier. I still pull White’s story out every few years and revel in its wit and charm, and my own half-smoldering desire for an Airedale Terrier.

Since no kid can choose just one favorite author, I’ll tell you my favorite author in the literary category: James Hurst. He wrote the heart-wrenchingly beautiful short story “The Scarlet Ibis.” My fifth grade teacher read this aloud to the class, and I remember sobbing uncontrollably all afternoon. I rediscovered the story, hardbound, a few years back. I still find the writing remarkable.

3. Where do you go to write? Boulder has such wonderful spots to just sit and enjoy. Do you ever choose them instead of home?


Unlike author friends of mine who frequent coffee houses, the noisier the better, I write at home. My upstairs window looks out into trees with a hint of the Flatirons behind them. Birdsong is the only soundtrack. One time I did write elsewhere. On a particularly important, nature-laden part of Tributary’s rewrite, I went to sit in the shade of a cottonwood tree near a little lake in south Boulder for two days. I figured my Shoshone character Kashess spent all of her time out of doors so I should, too. I let my day be more like her day. Let the sparkling waters and rough weeds take charge of the writing. I think it worked. I hope readers agree. Tributary is as much about land and water and wildlife as it is about people.

P.S. I also had a budding writer’s crush on Farley Mowatt.