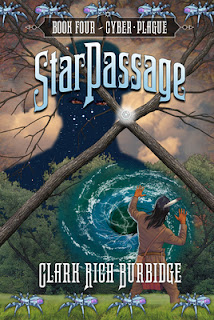 The fourth book in the popular YA adventure series, StarPassage, is a thrilling, non-stop odyssey across time. Mike Hernandez and the Coleman twins return, but just when the friends think they have the Star of Passage, it’s riddles, and Orion’s Belt figured out, they discover a new relic.

All of Tim and Martie’s rules are tossed aside when Tocho, a member of the Native American Shoshoni tribe which roamed the Rocky Mountains, knocks on Callie and Courtney’s Astoria, Oregon door with the mysterious Star of Hope. The new relic has the shocking ability to transport the teens forward in time, where cartels and gangs are a rising threat and technology has advanced so far that computer viruses affect humans. As Mike, Callie, Courtney, and Tocho struggle to remain free of the virus, they also have to dodge the shadowy Trackers, those wicked souls who are doomed to haunt history and desire the relics to free themselves from their eternal prison.

The teens find themselves racing to save a possible future, but can they change it for the better? Award-winning storyteller Clark R. Burbidge’s latest addition to the StarPassage series, StarPassage: Cyber Plague, will inspire you to pave the way for a brighter tomorrow.

I am very excited to see sisters, Callie and Courtney. I was briefly introduced to them in book three. Yet, having now passed the torch and the sisters are the new star holders, they are the main leads in this book. Of course I can't forget Mike. He appeared in prior book.

This book was more on the modern side. The prior books went into the past. Tocho appears at Callie and Courtney's house. Everything is so new to him. I am not just talking about the language but food and technology are huge. As if that is not enough, everyone has to contend with a plague/virus. Of and I can't forget that the Tracker is still chasing after the star.

Having read all of the books in this series, I have grown to really form a close bond with all of the characters. Each book has not only a good story and characters but important messaging as well. While, I did like this book, I did find myself reading it slower that past ones. One I had to caught up speed again on the past books as it has been a while between book three and this one. Also, I liked the past better than the present but still a fan of this series.