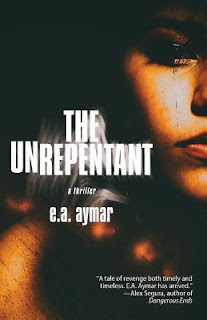 Eighteen-year old Charlotte Reyes ran away from an abusive home only to end up fooled, kidnapped, and spirited across the country by a group of criminals. When she is rescued by Mace Peterson, a former soldier, they can’t seem to shake the gang or the crooked cop paid to bring her back. Seeking the revenge she feels is owed, Charlotte realizes she only has one option. She has to fight.
Corruption, cliffhangers, and violence drive this page-turner, while current issues relating to legalized sex work and mental health comment on relevant conversations that the public is focusing on right now.
My Review

Mr. Aymar mentions in the author note that most women don't come into prostitution like Charlotte; but the painful; sense of identity loss and subsequent emotional repercussions are real. I thought Mr. Aymar displayed these things very well in this book. It really brought Charlotte's struggle and her determination to be a fighter that more real. She is the true star of this book.

Where Mace is concerned; his character surprised me. Having a military background, I felt and expected him to be a protector and fighter as well. Yet, he was more of a bystander. Mr. Aymar pens a book that readers needs to pick up a copy and read with The Unrepentant! 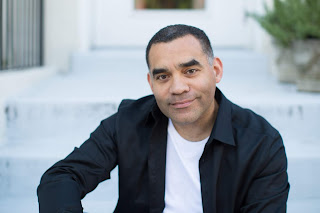 E.A. Aymar’s other thrillers include the novel-in-stories The Night of the Flood (in which he served as co-editor and contributor), as well as I’ll Sleep When You’re Dead and You’re As Good As Dead. Aymar’s column, “Decisions and Revisions,” appears monthly in the Washington Independent Review of Books, and he is also the Managing Editor of The Thrill Begins, International Thriller Writers’ online resource for aspiring and debut thriller writers; he also serves on the Board of the International Thriller Writers, as Vice President of Author Programs. In addition to ITW, he is a member of the Mystery Writers of America and Sisters in Crime. Aymar also runs the Noir at the Bar series for Washington, D.C., and has hosted and spoken at a variety of crime fiction, writing, and publishing events nationwide. He was born in Panama and now lives and writes in the D.C./MD/VA triangle. https://eaymar.com/


I read everything I could...and the reading was horrific. I came across volumes of painfully detailed accounts about sex trafficking from women - it’s almost always women - trapped within the practice. The brutality that these women (and, often, children)  undergo is unimaginable, and I think that’s part of the reason societies have allowed it to continue. We can’t confront the truth of what’s happening. We’d prefer not to look. But I found it impossible to look away.
And, from that exhausting research, the story emerged.
I also interviewed a number of people involved in organizations dedicated to the prevention of sex trafficking, as well as women involved in the practice. Those people are the strongest I’ve ever met, and their openness touched me. I hope I did them justice.
Like me, my characters have always been of mixed race, and it’s honestly not something I thought much about. But I didn’t see those characters in books or television or movies while I was growing up, and it wasn’t until recently that I realized I’ve been creating the characters I wished I’d had as a young reader. If someone doesn’t quite feel like he or she belongs to society in some way, and they read my work, I hope they feel a sense of connection. I’d love to give someone that shared experience.
To that end, I’m really proud of the diversity among the novel’s protagonists. I live in an area filled with a mix of races and religions, and I think that mix represents the future of America, as well as the next movement in American literature. It’s an exciting time to see this change, and it’s exhilarating to be a part of it.
Oh, good question! The title could refer to a couple of characters within the book, but for me, it’s Charlotte. It was important for me to create a strong female lead, but this lead had to do things I didn’t quite accept. I don’t know if I agree with Charlotte’s decisions, but I do believe she would make them. And to do that, she needed to go somewhere she may never come back from. Somewhere I’m not sure I could go. Those types of people have always fascinated me.
Really, so much! I was recently elected to the Board of the International Thriller Writers, and this summer, I found myself sitting at a table with Lee Child, R.L. Stine, David Morrell, MJ Rose, Steve Berry, Jenny Milchman...all writers who have written books that appeal to a wide swath of readers. I don’t think I said a word the entire time, which probably made for a dubious first impression, but there was so much to learn. The writers weren’t in “presentation” mode, they were all just casually talking about writing and the industry. I could have easily taken pages of notes.
The thing that struck me, when listening to all of these tremendous writers, was how often their advice came in the form of stories they’d heard, or advice they’d received from others. Essentially, they listened, and listened well. That’s what I took from that first meeting, and the advice I’d give to others. Always listen. And don’t just listen to what people say; listen to how they say it. A single conversation can tell you more about someone than they may want to reveal.
There are a couple of themes that seem like they’ll always factor into my writing, and violence is definitely one. And it’s not one I ever want to glorify. I want to prevent violence as realistically as I can, which means that it’s necessarily repulsive. I don’t want to write something too distressing for readers, but I do want it to be disturbing.
You can see the problem that presents when you’re trying to sell books.
Like a growing number of Americans, violence has personally affected my life on multiple occasions, and it’s never been the way it’s depicted in popular movies. Violence is messy, and distressing, and not easily resolved. And there’s nothing we can really do about it. We’re at a time in our history where - I think - a lot of people feel helpless. The amount of media we have is wonderful, but we’re inundated with information, and absorbing it is often overwhelming. I guess that’s why I write about violence. It’s the only way I can control it.
E. A. Aymar