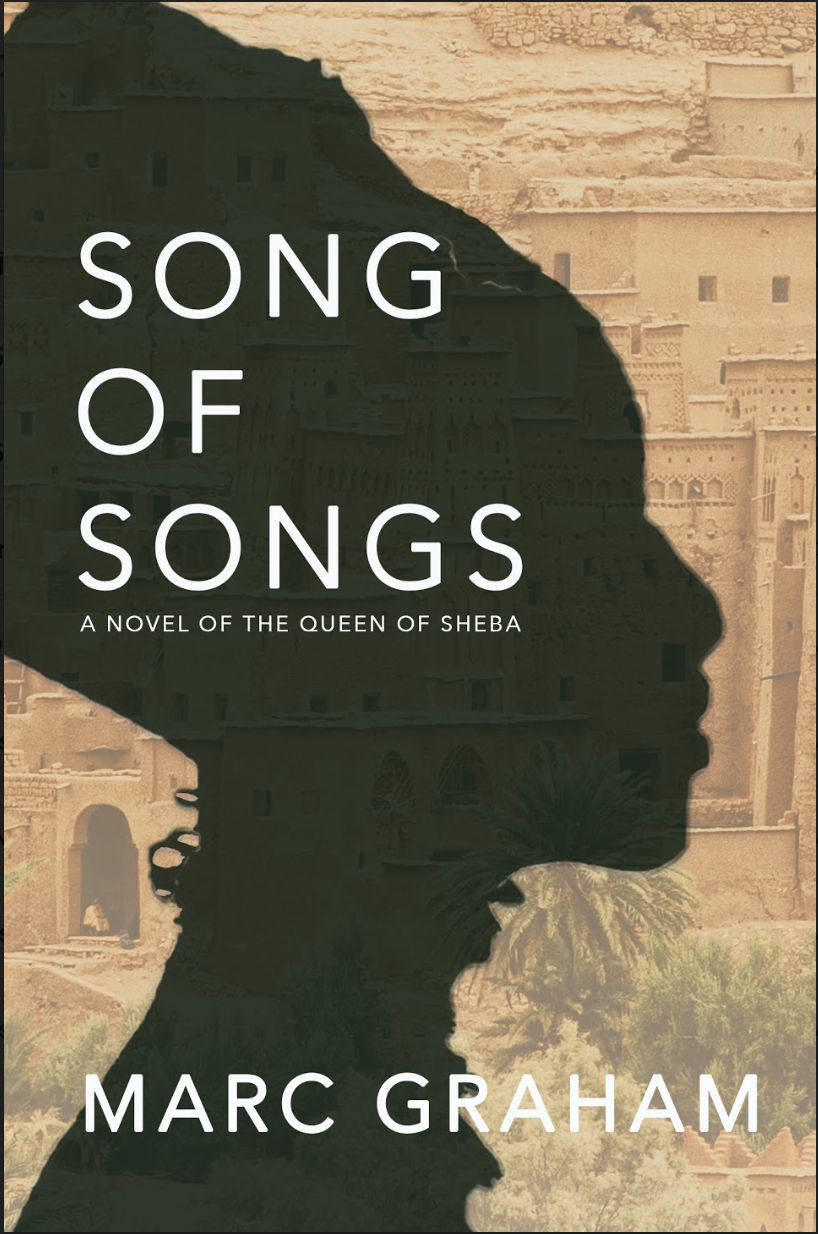 
CASTLE ROCK, CO—Award-winning author Marc Graham creates a fresh tale that weaves history and legend in Song of Songs: A Novel of the Queen of Sheba (April 16, 2019, Blank Slate Press). Using the newest archaeological finds and linguistic research, Graham constructs an accurate depiction of the Middle East in Old Testament times while bringing to light an important but rarely touched upon historical figure.
Lift the veil of legend for the untold story of Makeda, the Queen of Sheba, and Bathsheba, wife and mother of Israel’s first kings. When Makeda comes of age she inherits what her father has left behind. Her city is on the brink of destruction as a crumbling dam threatens to wash away everything that Makeda has known. Graham’s characters explore the idea of familial honor in times of cultural disruption, their individual paths in light of their strong mythic beliefs, and to give voice to powerful women in history often neglected.

Marc Graham was raised in Michigan before attending Rice University in Texas, where he studied mechanical engineering. After spending several years traveling the country with his wife, he eventually landed in Colorado where he lives along the Rocky Mountains. His first novel, Of Ashes and Dust, won the Paul Gillette Memorial Writing Contest and National Writers Association Manuscript Contest. Graham is an actor, speaker, story coach, shamanic practitioner, and whisky aficionado. When not on stage, in a pub, or bound to his computer, he can be found traipsing about the foothills and mountains with his wife and their Greater Swiss Mountain Dog. Learn more at https://www.marc-graham.com/

An Interview with
Marc Graham
Don’t tell Marie Kondo, but there was a significant expansion of my home library. I scoured recent (and some much older) books on history (both mainstream and heretical), comparative religion, and archaeology—including web sites dedicated to current excavations in Jerusalem and elsewhere. I also dug deep into the lore: Jewish, Ethiopian, Arabic, and Masonic. As it turns out, what we consider documented history begins around 500 years after the events of my story, so there were huge gaps in our knowledge that I had to fill in as best I could. I’ve tried to color within the lines of solid archaeological findings, while taking creative license with the story in between.
I’ve known the traditional, Biblical story of the Queen of Sheba since early childhood. When I entered Freemasonry in my late 20s, I discovered a whole new lore around the building of the temple in Jerusalem. One legend in particular caught my attention, about a love triangle between King Solomon, the Queen of Sheba, and Hiram Abiff (the temple-builder). I began researching more variations on the story, and it wasn’t long before Makeda began whispering more of her story to me.
I’ve identified the land of Sheba as ancient Saba, located in what is today Yemen. Where a magnificent dam once watered the desert to feed a nation, today millions of people lack food, clean water, and basic medical care. The ongoing civil war in Yemen has created what the UN considers the world’s worst humanitarian crisis, putting more than 8 million people (some figures go as high as 22 million) on the brink of starvation. To honor Makeda and her dedication to her people, I’ve pledged half of my proceeds from the book and subsidiary sales to Yemen humanitarian relief. The Zakat Foundation of America has graciously stepped in with matching funds to provide what aid we can to a war-ravaged people.
For as long as I can remember, I’ve been both a storyteller and a tinkerer. On the one hand I created imaginary worlds, while on the other I took apart the objects of the real world and put them back together again—hopefully without too many leftover parts. Engineering is about creative problem-solving, identifying a need or challenge, and crafting a satisfying solution. Storytelling serves much the same function, whether the need be sheer entertainment or social change. Since many of my stories involve lost or forgotten or hidden history, I have to reverse-engineer the accepted story to get to a plausible version of “what actually happened.”
Mainly, I just want people to enjoy the 10 hours or so they’ll spend in this world, to come away richer for the experience. If there’s a larger takeaway or theme, I suppose it would be that each of us has the power to choose how we respond to our circumstances, even if we can’t control the circumstances themselves. We all have the power to change our world, whether that world extends a few blocks or around the globe. And it’s important to recognize that truth is not the story the world tells about you, or that you tell to the world—it’s the story you tell with your actions that matters.
Marc Graham