Forget You Know Me 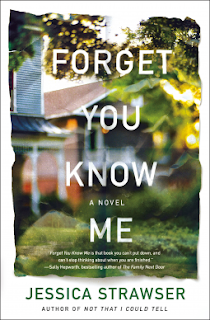 When a video call between friends captures a shocking incident no one was supposed to see, the secrets it exposes threaten to change their lives forever.

Molly and Liza have always been enviably close. Even after Molly married Daniel, the couple considered Liza an honorary family member. But after Liza moved away, things grew more strained than anyone wanted to admit—in the friendship and the marriage.

When Daniel goes away on business, Molly and Liza plan to reconnect with a nice long video chat after the kids are in bed. But then Molly leaves the room to check on a crying child.
What Liza sees next will change everything.

Only one thing is certain: Molly needs her. Liza drives all night to be at Molly’s side—but when she arrives, the reception is icy, leaving Liza baffled and hurt. She knows there’s no denying what she saw.

In disbelief that their friendship could really be over, Liza is unaware she’s about to have a near miss of her own.

And Molly, refusing to deal with what’s happened, won’t turn to Daniel, either.
But none of them can go on pretending. Not after this.

Jessica Strawser's Forget You Know Me is a “twisty, emotionally complex, powder keg of a tale” (bestselling author Emily Carpenter) about the wounds of people who’ve grown apart. Best, friends, separated by miles. Spouses, hardened by neglect. A mother, isolated by pain.

One moment will change things for them all.

I agree with a bunch of readers that the opening scene was great. It sucked me in and had me on the hook. I was ready to jump in with both feet for the rest of the story. This is where things went downhill for me. Yes, there is something bizarre and mysterious about Molly's attitude. If it was me and my friend had called the cops because they saw an intruder in my house, I would have been unnerved and thankful that nothing happened. Molly was cold towards the situation. Also, the way that her husband reacted was strange as well. First he was suppose to be out of town and then he comes home early. There were some unanswered questions that kept me reading; despite the fact that I shared no connection to any of the characters other than maybe Liza.

Yet, after reading half way into the story and still not getting any closer to the character as well as finding myself re-reading parts, I could no longer stick with this book. I did jump to the last few chapters to see how the story ended. Overall, this book missed the mark with me. This is sad as I do think that there could have been something there if I could have found that connection with the characters. Additionally, I felt like the pacing could have used a boost.


Request a copy on Netgalley until Feb 5.
Jessica Strawser

Mihail337 said…
In the healthcare business, nurses are finding that individuals who have pursued an RN-BSN diploma program tend to be times prepared to proceed from traditional patient care to distinct roles in the health care sector. You can read more at here

AmandaMorgan said…
I don't read this book I hope that soon I'll find time for this. Most of all I like reading and writing. It's the best way of thinking and explaining. My favorite kind of writing is an interview essay. First of all, because it can require an interview with a person, it's always great. The next step is writing and describing this interview. I think it the best writing task.
April 22, 2019 at 1:30 AM

lindanorwood said…
I have read this book either as the other commentators but I hope I'll manage to read case brief help tips for success https://essaysservice.com/case-brief-help-tips-for-success.html so that I could make more good things in a short time.
May 28, 2019 at 12:51 AM

Jaime Bradley said…
Hello, I would like to thank you for sharing this interesting information. I appreciate reading it. I was actually looking for a place where I can buy discussion board post. Nevertheless, thanks a lot.
June 10, 2020 at 12:43 PM