Break the Bodies, Haunt the Bones 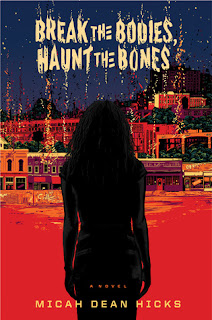 Swine Hill was full of the dead. Their ghosts were thickest near the abandoned downtown, where so many of the town’s hopes had died generation by generation. They lingered in the places that mattered to them, and people avoided those streets, locked those doors, stopped going into those rooms... They could hurt you. Worse, they could change you.Jane is haunted. Since she was a child, she has carried a ghost girl that feeds on the secrets and fears of everyone around her, whispering to Jane what they are thinking and feeling, even when she doesn’t want to know. Henry, Jane’s brother, is ridden by a genius ghost that forces him to build strange and dangerous machines. Their mother is possessed by a lonely spirit that burns anyone she touches. In Swine Hill, a place of defeat and depletion, there are more dead than living.When new arrivals begin scoring precious jobs at the last factory in town, both the living and the dead are furious. This insult on the end of a long economic decline sparks a conflagration. Buffeted by rage on all sides, Jane must find a way to save her haunted family and escape the town before it kills them.

First off, let me start by saying that this book is unique. It will mess with your mind and not in a good way. However, this translate to a book that you must read. If you are a fan of horror books than you will want to pick up a copy today.

This is a family affair. Jane and her brother, Henry were not just the only ones trying to battle the evilness that encroaches on their town. While, I did find Jane to be strong; she was not the only strong female character in this story. Bethany kicked some serious ass as well. Yet, here is where the stuff of nightmares is at...walking, talking pigs. This is what the ghost that inhibits Henry's body has him creating. Turning pigs into people. They are replacing the jobs of the townfolk.

This book is so bizarre but at the same time I could not stop reading it. Just when I thought it could not get more weirder; something else would happen in the story that would have me in awe. I can't really explain this book in a way that gives it justice, so you will just have to check it out for yourself.
Micah Dean Hicks