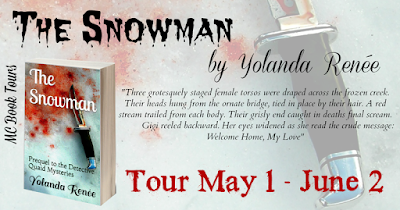 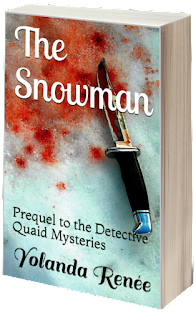 It’s a pleasure to be participating in author Yolanda Renée’s THE SNOWMAN Blog Tour through MC Book Tours today.


This is a prequel to the author’s Detective Steven Quaid Mysteries. This story tells of Steven's first case as a rookie detective. It takes place 10 years before the events in MURDER, MADNESS & LOVE, the first book in the series.


The author is offering a tour-wide giveaway featuring both print and eBook copies from her series. More information on the giveaway is listed below.

It takes a true artist to pursue his victims in the art of seduction, and Stowy Jenkins is no exception, especially with blood as his medium.

Stowy Jenkins, aka, Stone, and as Alaskans refer to him, the Snowman, is a true artist. His muse, Gigi, is the ultimate inspiration for his painting. Her rejection inspires him to use a very unusual medium…blood.


While art may be his passion, the taste for blood is his obsession, and multiple murders, the result.


Rookie, Detective Steven Quaid, is no fan of the Snowman’s murderous exhibitions. A twisted and deadly relationship bond the two men and neither knows who will come out of it alive.

If you are not afraid of gore or torture, then, you will enjoy this book. However, if the thought of these two words has you running, you will want to stay away from this book. Although, the scenes are not long and drawn out as the "Snowman" kills his victims, they are still graphic enough.

I have not read any of the other books in the series. Yet, after reading this book, I now want to go back and read the other four books. If you are like me just first being introduced to this series, than, this book is the perfect one to get you started. Detective Quaid is a strong character with intelligence. He was matched well with the "Snowman". The ending was great as well. The author has a new fan in me. This book is a recommended read! 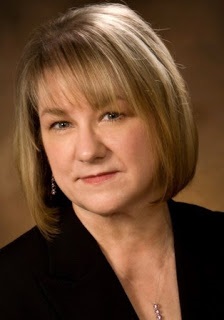 At one time Alaska called to me, and I answered. I learned to sleep under the midnight sun, survive in below zero temperatures, and hike the Mountain Ranges. I've traveled from Prudhoe Bay to Valdez, and the memories are some of my most valued. The wonders, mysteries and incredible beauty that is Alaska has never left me and thus now influence my writing.

Despite my adventurous spirit, I achieved my educational goals, married, and I have two handsome sons. Writing is now my focus, my newest adventure!

You can connect with me here:

Excerpt:
A heavy snow is falling, exciting his murderous passion. With trembling fingers, Stone prepares for his greatest work of art. He tears open a package of duct tape, caressing the dull, gray roll before placing it onto the clean, white towels. A leather sports bag lies open. “Just a few more necessary items,” he mutters as he steps over to a rack on the wall.

After selecting three razor sharp knives, he unlocks the closet door. He gathers three syringes, and a vial of anesthetic, carefully wrapping them in a soft cloth. He places each one into the inside pocket of the bag.

A coil of twisted rope is snatched from the floor. Stone carefully measures and cuts the cord exactly fifteen inches. One by one he places each item into the bag. “Excellent…now for the final piece.”
Housed in a leather case, he lovingly places his new Nikon camera on top of the other items. “Now we are ready—so ready.”

This is a prequel to the author Yolanda Renée’s Detective Quaid Mysteries. This story tells of Steven's first case as a rookie detective. It takes place 10 years before the events in MURDER, MADNESS & LOVE, the first book in the series.

The other books in the Detective Quaid Series include:

A killer plays cat and mouse with a young widow against the snowy backdrop of an Alaskan winter. Branded a black widow after the suspicious death of her millionaire husband, Sarah Palmer flees Seattle for Anchorage. However, the peace and quiet she hoped to enjoy in her hometown is soon shattered. A killer is murdering Sarah look-alikes on the 14th of each month, taunting Sarah with a valentine of evidence. After her experiences in Seattle, Sarah is slow to go to the police. When she finally does, she finds Detective Steven Quaid—Anchorage P D’s hotshot investigator—has not only heard the rumors, he believes them. Worse, her aloofness and composure only confirm his suspicions. Is Sarah a victim or a very skilled manipulator?

World damnation is a psychotic man’s goal, but two obstacles stand in his way, greed and a dedicated detective.


Catching Alaska’s most notorious serial killer as a rookie made Detective Steven Quaid a hero, but falling in love with the victim of his last case tarnishes that status. While attempting to repair both his personal and professional life, he stumbles upon an unusual case–and an even more extraordinary foe: a man who believes he is Lucifer. An insidious man who delivers Quaid the ultimate choice: save his fiancée from an assassin’s bullet or stop the sacrifice of a young girl.

Flames burn between a hardboiled cop and a gifted artist, but soon extinguish as another man’s obsession ignites into an inferno of desire, driving him to destroy the object of his madness.


Detective Steven Quaid is ready for new challenges as Anchorage's top detective, but not until he marries the woman of his dreams on New Year's Eve. Determined to give Sarah the wilderness honeymoon she desires, he turns his grandfather's cabin into the perfect honeymoon retreat. After the final details are complete, Steven treks into the mountains to hunt. On his return to the cottage, instead of Sarah, he is greeted by several police officers and a bloody crime scene. Accusations fly, and Stephen flees into the wilderness, his heart racing and thoughts etching into his soul. The wilderness is unforgiving, but Steven faces it head on: Caught between a massive grizzly and a black bear in a deadly tug of war, he is barely saved from death's door by the fortuitous appearance of his uncle. Despite surviving multiple injuries, Steven continues his investigation as he recovers, but answers don't come quick or easy. Having enlisted the aid of his number one suspect, Steven faces a struggle that has become more than personal. This one just may cost him his heart.


You can find out more about the books and the author by following the tour HERE. You can also include your chances of winning in the giveaway.

Mason Canyon said…
Cheryl, I enjoyed your review. This is a fascinating series. Thanks for sharing Yolanda's story and for being a part of her tour.