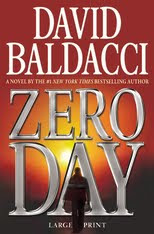 John Puller works for the Army’s Criminal Investigation Unit. So whenever the Army is in need of the best to help solve a murder, they turn to John. This latest murder case is a gruesome one. A colonel and his family including two little children were slaughtered.

John is joined by local authority Samantha “Sam” Cole. Together they head down a path of deceit, greed and murder.

It has been several books since I have read one from Mr. Baldacci. I have to admit that this was not one of his strongest. Though, it still kept my interest and there was plenty of action. The adrenaline rush and the characters were what I found lackluster. John was not bad but the secondary characters did not pop off the pages at me. I wanted them to as this was the type of story that they needed to. I kind of went through the motions, reading this book but not really caring if the good guys came out on top. I did like Sam. She was tough and could hold her own with John. Don’t be expecting much romance between John and Sam. They pretty much keep things on a professional level. There were not a lot of surprises in this book. Though, it is one that you can read and if you put it down for a few moments and still come back to and get right back into it. I hope that Mr. Baldacci’s next book has lots more action.