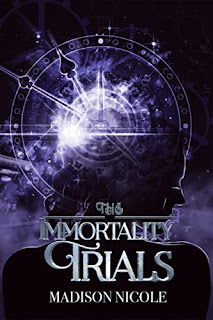 Greer Roberts has never wanted immortality. It was a privilege only allowed to the rich, magically gifted and powerful. There was no way she was going to enter the trials in order to win the prize of eternal life, considering humans never won and she would have to bargain with years off her own life to play the government's sick game. It was a price she was not willing to pay.Except now she doesn’t have a choice.Someone has falsely admitted her into The Immortality Trials and unless she can prove an imposter enrolled her she will have to compete or sacrifice her own life cycle. Kyra, past trial winner and warlock, begrudgingly becomes her best option for an ally. What quickly starts off as cold disdain with Kyra, quickly turns into an intoxicating seduction that Greer cannot seem to resist despite her better judgment.More mysteries start to unfold as immortals appear dead, old secrets are revealed and unlikely powerful friends offer aid. Something dark is brewing in the Republic and Greer finds herself in the middle of it.Greer must solve more than one mystery in order to keep herself alive. Her battle starts as soon as the Trials begin, the question is will she have enough time to save herself and the ones she loves before her time runs out?
My Review
This book was recommended by a friend. I am happy to report that it is just as good as she raved about it. I was instantly drawn into this magical world that author, Madison Nicole created. Not only that but the characters are amazing. None of them felt like second or third string characters. They all played important roles in the story.
For being a mortal, Greer never came off as a weakling compared to those who had powers like her best friend, Lux and love interest Ky. The chemistry between Ky and Greer is so spicy. They will make you need a tall glass of cold water.
Also, can I just take a moment to mention the plot twist that I did not see coming towards the end of the story. I mean...it will leave you sitting on the edge of your seat. I can't wait to read book two.
Madison Nicole