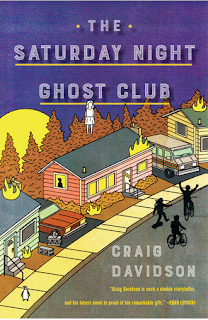 Set in 1980s Niagara Falls—a seedy, but magical place surrounded by intrigue and lore—THE SATURDAY NIGHT GHOST CLUB centers around Jake Baker and his uncle Calvin, a kind, but eccentric enthusiast of occult artifacts and conspiracy theories. The summer Jake turns twelve, he befriends a pair of siblings new to town, and so Uncle C decides to initiate them all into the “Saturday Night Ghost Club.” As the summer goes on, what begins as a light-hearted project leads to uncovering dark secrets beyond their imagination. With complimentary narratives of Jake as a twelve year old and as a neurosurgeon adult, Davidson explores an intricate dynamic between one’s childhood and adulthood not often written in literature.

At once a suspenseful, gothic story of hauntings real and imagined, and also a poignant portrait on how childhood experiences influence the adults we become. The genre-bending novel is more than meets the eye as Davidson gradually unfurls a twist you will not expect. THE SATURDAY NIGHT GHOST CLUB is the type of book you will think about for weeks after reading—about its emotional weight, its unforgettable characters, and its complex themes interwoven in the narrative, such as the mutability of memory and the power of familial love.

Both heart-warming and heart-wrenching, THE SATURDAY NIGHT GHOST CLUB is a page-turning, relatable novel for all readers.

I was drawn to this book because of the reference to Stranger Things. I am a fan of the show. It is such a cult classic. Thus, I was ready to find a book like this. While, there are horror elements and a darkness about this book; it was not enough for me.

Craig Davidson has published four previous books of literary fiction: Rust and Bone, which was made into a Golden Globe-nominated feature film, The Fighter, Sarah Court, and the Scotiabank Giller Prize-nominated Cataract City. Davidson is a graduate of the Iowa Writers’ Workshop, and his articles and journalism have been published in Esquire, GQ, and The Washington Post, among other places. He lives in Toronto, Canada, with his partner and their child. He also publishes bestselling horror fiction under the pseudonym Nick Cutter.


I have 1 copy to giveaway. US only. Leave a comment with your favorite ghost story and your email address. Winner chosen July 14th.
Craig Davidson

traveler said…
Thanks for this captivating and intriguing giveaway.
I never met my grandfathers. They died very young but there is a ghost story which concerns his appearance at my house when I was very young. He knocked on the door and wanted to meet the next generation. He was concerned and wanted to know who was named after him and would continue to be there for the family. saubleb(at)gmail(dot)com
July 9, 2019 at 6:56 AM

petite said…
A ghost story which I heard when I was young and at summer camp was memorable. When we were cleaning out a relative's house we were disturbed by a rap, rap, rap. We checked out the attic, then the basement which was louder and we opened a trunk and there was a roll of wrapping paper. This novel interests me and many thanks. elliotbencan(at)hotmail(dot)com
July 9, 2019 at 12:47 PM

SavingsInSeconds said…
I love a good ghost story! One of my favorites is the one about the two sisters who lived in a Charleston, SC house. The house is a restaurant now, and some people say they've seen the sisters in the mirror.
Dianna (dedezoomsalot at yahoo dot com)
July 12, 2019 at 9:55 PM