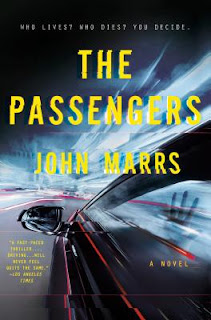 You’re riding in your self-driving car when suddenly the doors lock, the route changes and you have lost all control. Then, a mysterious voice tells you, “You are going to die.”  Just as self-driving cars become the trusted, safer norm, eight people find themselves in this terrifying situation, including a faded TV star, a pregnant young woman, an abused wife fleeing her husband, an illegal immigrant, a husband and wife, and a suicidal man. From cameras hidden in their cars, their panic is broadcast to millions of people around the world. But the public will show their true colors when they are asked, "Which of these people should we save?...And who should we kill first?"

Wow, this book far exceed my expectations. I was hooked. I could not stop reading it. Every little bit that I read; I would share with my co-worker without giving away too many details.

The concept of this story is very relevant. I could see it actually becoming reality in a few years. Which made the story that more intriguing. We already have test "driverless" cars on the road. In fact, there are commercial trucks on the road. Also, I know the military has mentioned before having "pilotless" aircrafts. We as a society have become to dependent on "technology" that I know when my computer at work goes down that it can be crippling for a while.

I like that details about each character was given to me in pieces and not all at the same time. It allowed me to get to know them better. When the first character's secret was revealed I thought that was a shocker but each secret after that seemed to be even bigger.

Don't be a "passenger" and let this book pass you by without picking it up and reading it. Mr. Marr's will take readers on an adrenaline car ride filled with lots of twists and turns that will have you on the edge of your seat!
John Marrs