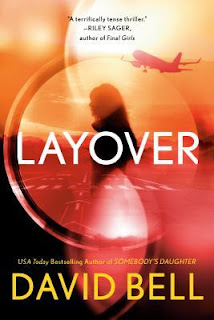 Joshua Fields takes the same flights every week for work, his life a series of departures and arrivals, hotels and airports. During yet another layover, he meets Morgan, a beautiful stranger with whom he feels an immediate connection. When it’s time for their respective flights, Morgan kisses Joshua passionately, lamenting that they’ll never see each other again.
As soon as Morgan disappears in the crowd, Joshua is shocked to see her face on a nearby TV. The reason: Morgan is a missing person.
What follows is a whirlwind, fast-paced journey filled with lies, deceit, and secrets as Joshua tries to discover why Morgan has vanished from her own life. Every time he thinks one mystery is solved, another rears its head—and his worst enemy might be his own assumptions about those around him.

I am a fan of Mr. Bell. Therefore, I was very much looking forward to reading this latest offering from Mr. Bell. Sadly, this book was not such a hit run for me. Yet, I am still a fan.

The storyline is fine. A little unbelievable but still a good one. It would have been made better if the main characters, Joshua and Morgan had been more engaging. I found them better when they were conversing together but if you looked at each one separately, they were kind of boring. Well, I take that back; Joshua was the dull one. Morgan is the woman of mystery.

Here is where the unbelievable part comes in for me. It was kind of hard for me to believe that Joshua after just one meeting felt such an extreme, strong, emotional pull towards Morgan. So much that he would track her down and protect her; even if it meant he had to throw himself in the path of the police. Another thing that was lacking was the high intensity that I have come to know and expect from a Mr. Bell novel. Here is hoping that the next book is a winner with me.
Joshua Fields takes the same flights every week for work. His life is a series of departures and arrivals, hotels and airports. During yet another layover, Joshua meets Morgan, a beautiful stranger with whom he feels an immediate connection. When it's time for their flights, Morgan gets up to leave, leans over and passionately kisses Joshua, lamenting that they'll never see each other again.

As Morgan slips away, Joshua is left feeling confused by what just happened between them. That's when he looks up and is shocked to see Morgan's face flashing on a nearby TV screen. He's even more shocked when he learns the reason why--Morgan is a missing person.

What follows is a whirlwind, fast-paced journey filled with lies, deceit, and secrets to discover the truth about why Morgan is on the run. But when he finally thinks every mystery is solved, another rears its head, and Joshua's worst enemy may be his own assumptions about those around him...
David Bell