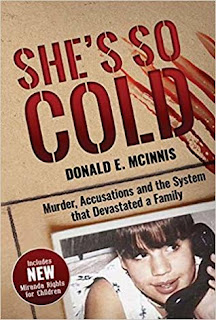 Think this couldn’t happen to your family? Think again.
In the winter of January 1998, the small town of Escondido, California, was horrified when the body of 12-year-old Stephanie Crowe was found brutally murdered in her own bedroom. The police used psychological manipulation to force three 14-year-old boys to falsely confess to the murder. She’s So Cold traces the twists and turns of a real-life mystery which eventually changed the lives of fifteen people and cost a district attorney his job.
To protect children and teens from such manipulation in the future, McInnis proposes a new Children’s Miranda Rights Warning and a Bill of Rights for Children who are being questioned as suspects. These proposals must be adopted in order to prevent minors from making false confessions that could destroy their futures.
She’s So Cold is the story of a broken system. A system stacked against families and, most of all, against children.

If you are a fan of true crime stories, you will like it but it might be a slight departure from other true crime novels. This is because this book is not so focused on the "victim" but more about the questioning that Stephanie's brother and two friends endured during the interview process. The main focal point of this book is to showcase Children’s Miranda Rights Warning and a Bill of Rights for Children.

As I was reading this book, I did feel and experience injustice as well as anger. The type of harassment that the three boys endured was horrible. It is no wonder that they would and did say anything that the authorities wanted them to say. The whole process was very speedy and not well researched. It is lucky that Mr. McInnis was assigned to represent one of the boys. If not, the boys may never have been released.
Donald E McInnis

Mystica said…
Forced or manipulated confessions are not as uncommon as imagined. This sounds good reading.
June 17, 2019 at 8:08 AM