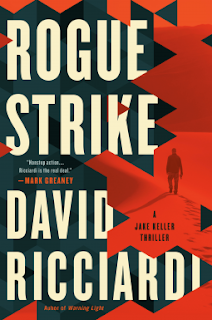 In Mecca, a U.S. drone is captured on camera dropping attack missiles on innocent pilgrims. Thousands of lives are destroyed, and it appears that a U.S. revenge mission is to blame. All cards are off the table as nations around the world peg the American government for a blatant crime against humanity, and top leaders are scrambling for anyone to blame… including new CIA operative Jake Keller, who was meant to use the drone in Yemen to take down a top al Qaeda leader.

In China, a careful plot is underway to build alliances―and it wouldn’t be so hard to point the finger at a powerful rival for atrocities it’s not responsible for. It’s not so long before things begin to take a turn at home in America. Are terrorist attacks against civilians a retaliation for U.S. actions in the Middle East? Or is a terrible, sinister plot to blame?

On the run for his life from the Middle Eastern governments who have placed a bounty on his head, and from the American forces who refuse to defend him, Jake must prove his innocence in yet another chase scene to the finish.


I read the first book in this series and thought it was fine but I was not really as engaged in the characters despite the good storyline. This time around is way better. Instant nonstop action from the beginning to the end. Fans of military thrillers will be pleased with this book.

Zac Miller now known as Jake Keller is back. This time stronger than ever. As I stated previously, I liked the prior novel but I was struggling to engage with the characters. While, there are many each one played a role in the overall storyline. In addition, it was easy to keep them all straight.

I was taken on a roller coaster ride all over the world. It was like an action packed movie playing in my head while reading this book. Try this book out for yourself.


A keen outdoorsman, David Ricciardi is a certified scuba rescue diver and a former ski instructor. He has backpacked through the mountains of the western United States and Alaska, and once woke up for a 2 AM watch aboard a sailboat only to discover that it was headed the wrong way through the Atlantic sea lanes in heavy weather, with one of the crew suffering from hypothermia. ROGUE STRIKE is his second novel.