When We Were Lost 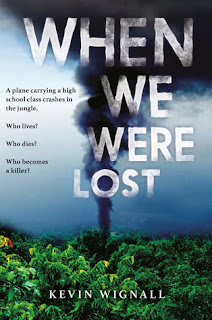 When a plane bound for Costa Rica crashes in deep jungle, the tail section breaks free and nineteen teenagers miraculously survive. Joel Aspinall, son of a local politician and student rep on the school’s council, is quick to take on the mantle of leadership, to organize everyone until a rescue party arrives.

But the plane was crashed on purpose, no one knows where they are and no rescuers are coming. To make things worse, Joel’s decisions lead to more people dying, and he’s determined to wait it out.
Tom Calloway didn’t want to be on this trip. Tom doesn’t want to bond with his classmates – he isn’t the bonding type. He’d rather they just left him alone, and he’s always been unfriendly enough that they’ve been happy to oblige. But that was before the crash. Now he finds himself building the friendships he’s always tried to avoid. And despite his determined efforts to be left alone, he begins to see that he might be the one to challenge Joel and pull off another miracle, by getting all the survivors to safety.

When We Were Lost, featuring elements of Lost and Lord of the Flies, is a novel of survival, of teenagers thrust into a hostile environment. It’s a novel of life and death and the razor-thin dividing line between them. And it’s a novel about finding a place for yourself in a world that’s infinitely complex.

This is one book that actually took me by surprise. It was surprising how good it was. I didn't hate the characters. Which is what I was expecting to happen is to find a bunch of whiny teenagers. Even the "jerk" was reasonable. I could understand where he was coming from and why he acted the way he did. He actually was not so much a leader. It is just that he did not know any other way of coping with the situation. You strip away the layers and all you got was a scared boy.

Because I actually liked all of the characters, this book was not only an enjoyable read but a fast one as well. It took me a shorter time to read this book than it did for the characters to be rescued. There was a tiny touch of romance but it was fleeting. I am glad that it was as it didn't really feel like it was necessary or wanted for the story. If you are looking for a good book to read you should pick up a copy of this book. The only thing that you will get "lost" in is this book.
Kevin Wignall