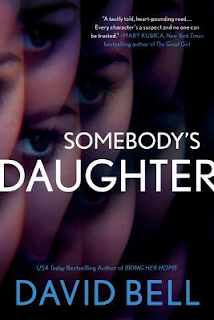 When Michael Frazier's ex-wife, Erica, shows up on his doorstep pleading for help, she drops a bombshell that threatens to rip his family apart: Erica's nine-year-old daughter is missing--and Michael is the father. Unable to quickly determine if Erica is telling the truth, and unwilling to leave the little girl's fate to chance, Michael has no choice but to follow the elusive trail of the child he has always wanted and never knew he had.

But finding Felicity comes at a price--the closer Michael gets to the truth, the further into jeopardy his marriage falls and the faster his family begins to unravel. As lies that span a decade bubble to the surface and the window for Felicity's safe return closes, Michael will have just a few short days to decide who can be trusted and who is hiding the truth.

I am a fan of this author's. I enjoy reading Mr. Bell's books. Thus I was very excited to read this latest offering from Mr. Bell.

The overall story is good. Not as tight a level of high intensity that I have come to expect from Mr. Bell's books but again I did enjoy this book. The characters Michael, Erica, and Angela were all personable. Although, the star for me is Angela. She felt the strongest. I kind of found it hard for me to believe that Michael didn't wise up more when facts were not adding up with Erica's story. Yet, I did like how the story did all come together in the end. Here is to the next book from Mr. Bell.
David Bell