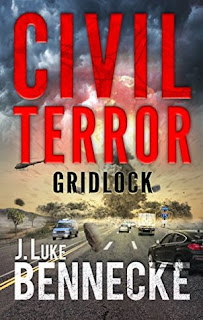 Self-driving vehicles finally arrive. But so do the terrorists.
A thought-provoking thriller about artificial intelligence and the self-driving revolution.
You’ll be forced to consider how you’d react if you were cornered…
and trapped in a terrifying life-threatening situation.
Fed up with slogging through the treacherous LA traffic to get to work, Jake Bendel and a cunning team of experts create a roadway system for self-driving cars — preventing thousands of traffic deaths and reducing commute times from hours to minutes.

For three months, no traffic congestion. No accidents. No fatalities. People finally feel safe in their cars. But should they?

Especially when the dark side of humanity sees this as a chance to destroy the United States.
A Syrian terrorist group weaponizes the system and devises a scheme to kill more Americans in one day than the 407,000 + U.S. soldiers killed in World War II.

Viktor, a tormented psychopath and the mastermind behind this ruthless attack, is driven by the voices of his dead mother and Allah …who guide his every move.

While he and his brothers mercilessly annihilate Americans in the name of the Jihad, Viktor plants evidence that convinces the public Jake is the architect behind the most heinous terrorist attack in U.S. history.

But one rogue FBI agent believes Jake is innocent. Together they unearth a mole deep inside the FBI, go off the grid, and hash through a trail of hidden clues to stop Viktor from slaughtering millions of unsuspecting American drivers in a matter of minutes.

The clock is ticking. Can they stop him in time to prevent another savage bloodbath?

Civil Terror: Gridlock will grab you by the throat and pull you into a vicious struggle that will define the fate of the world for generations to come.

If you like Dan Brown, Lee Child, or Jon Grisham, you’ll love J. Luke Bennecke.
Buy it on Amazon here!

I liked this book. It was fast paced. Although, this is a time where the story started moving so fast that I did have a bit of trouble in the beginning keeping all of the characters straight that were coming at me instantly. The main lead, Jake is good. He was interesting and had a good personality.

The concept for this book is believable. With today's world and all of the things that we relay on for technology, is not that far off to believe that someone(s) could hack into a system and cause havoc. I read a book a while ago about how easy it could be for someone to take down our power system and cause a wide spread power blackout.

While I did like this book, at times it seemed to go on very long. In fact, the book could have been about a hundred pages less and still kept the overall aesthetics of the story without missing anything. On the other hand I could see this book being made into a movie.

Which came first...the plot or the characters?
For this book, the plot came first. Just barely, though! The character arcs and emotions drive the story just as much, if not more, than the overall plot. If the plot were a cake, you can still mix the icing while the cake is cooking in the oven!
Do you have a writing routine?
Yes. The creative process works better for me early in the morning. I write about 1,000 words per day, or about half to a full chapter, after editing the previous day’s work/chapter. Sometimes, if I get on a roll, I write/edit into the afternoon, but that’s more of an exception!
On a scale of 1 - 10; how believable is the concept that the events in this book could come true?
As an engineer/project manager I regularly evaluate risks as part of my job. As far as believability, I’d say 10 out of 10. Everything in this story could actually happen, the details of the bombs, physics, cyber security, etc. are all frighteningly realistic. From a probability perspective, however, I’d put the odds quite low, maybe 2 out of 10.
If this book was to be turned into a movie; who would you want to direct it and star  in it as the main leads?
John Hamm or Gerard Butler would make excellent civil engineer heroes. Ron Howard (Davinci Code) would be a dream director.
What are you working on next?
This book is the first installment in a four-part series. The draft of the sequel has been written and we’re in the editing phase right now. Each book in the series offers realistic engineering solutions to current issues (eg traffic congestion). The sequel solves the drought in California, but terrorists threaten the new system with a weaponized virus.