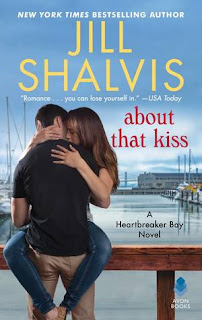 ABOUT ABOUT THAT KISS (a standalone Heartbreaker Bay novel)
When love drives you crazy . . .
When sexy Joe Malone never calls after their explosive kiss, Kylie shoves him out of her mind. Until she needs a favor, and it’s a doozy. Something precious to her has been stolen and there’s only one person with unique finder-and-fixer skills that can help—Joe. It means swallowing her pride and somehow trying to avoid the temptation to throttle him—or seduce him.
the best thing to do . . .
No, Joe didn’t call after the kiss. He’s the fun time guy, not the forever guy. And Kylie, after all she’s been through, deserves a good man who will stay. But everything about Kylie makes it damned hard to focus, and though his brain knows what he has to do, his heart isn’t getting the memo.
… is enjoy the ride.
As Kylie and Joe go on the scavenger hunt of their lives, they discover surprising things about each other. Now, the best way for them to get over “that kiss” might just be to replace it with a hundred more.


This is the fifth book in this series. It can be read as a stand alone novel. If you are looking for a sweet, romantic read than you might want to pick up a copy of About That Kiss. Joe and Kylie made a cute couple. Kylie had some spunk to her. I like that she could push Joe's buttons as well as stand toe to toe with him. Even, he admitted it. Although, if there is anyone that I would want to have helping me, it would be Joe. He is patient, good looking, a good brother, and has charm.

The mystery aspect of this story was fine. It kind of seemed a bit muted and slow to come to the conclusion. Luckily, Kylie and Joe's interactions helped to keep the story flowing and interesting. Although, they couldn't keep it all the time entertaining. There were times in the middle that I lost interest. The last several chapters picked up speed. All and all I liked this book. 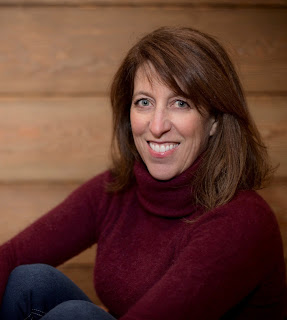 ABOUT JILL SHALVIS
New York Times bestselling author Jill Shalvis lives in a small town in the Sierras full of quirky characters. Any resemblance to the quirky characters in her books is, um, mostly coincidental. Look for Jill’s bestselling, award-winning books wherever romances are sold and visit her website, www.jillshalvis.com, for a complete book list and daily blog detailing her city-girl-living-in-the-mountains adventures.

Connect with Jill
Website: http://jillshalvis.com/
Facebook: @JillShalvis
Twitter: @JillShalvis
Instagram: https://www.instagram.com/jillshalvis/
Pinterest: https://www.pinterest.com/jillshalvis/
Tumblr: http://jillshalvis.tumblr.com/
Goodreads: https://www.goodreads.com/author/show/22370.Jill_Shalvis?from_search=true
Joe studied her. “I asked you once before, but now I’m going to ask you again. Is there something going
on between you two?”
She tossed up her hands. “Why do you both keep asking me that about each other?”
His eyes narrowed. “I thought nothing was going on.”
“And before today, I could’ve passed a lie detector test on that,” she said.
“What happened today?”
She paused. Not because she had anything to be ashamed of, but because she wasn’t quite sure what
had happened.
“Kylie.”
She sighed. “It’s nothing.”
“Try again,” Joe said and gave her the very male universal go on gesture.
She rolled her eyes. “Fine. He . . . finally made a move on me.”
Joe didn’t budge. Not a blink, not a muscle twitch, nothing, but she could’ve popped corn off the electric tension coming off him.
“Describe ‘made a move,’ ” he finally said.
She crossed her arms. “And again, how is this relevant to my case?”
He just gave her that careful stare again and she thought wow, those eyes of his should be registered as a lethal weapon, because she found herself opening her mouth and spilling her guts. “He kissed me.”
“He kissed you.”
“Yeah,” she said. “Do you know that you often repeat what I say?”
“What kind of a kiss?” he asked.
She was momentarily bewildered. “I don’t know. It was a kiss. A normal kiss. A nice kiss.” She cocked her head at him. “How many kinds of kisses are there?”
He just looked at her for a long moment before coming toward her. He backed her to the wall and pressed his big hands on either side of her head.
“There are many kinds of kisses,” he said.
Her breath had backed up in her throat, where her heart had lodged, pounding wildly. “S-s-such as?”
“Such as this one.” And then he leaned in and covered her mouth with his.
At the touch of Joe’s mouth, Kylie’s brain stopped being capable of rational thought. His tongue gave a knee-weakening stroke against hers and she let out a shockingly needy moan as she clutched at him, fisting her hands in the material of his shirt at his chest. Only when he’d thoroughly plundered and pillaged and left her boneless did he lift his head and
look into her eyes.
“Wow,” she whispered, fully aware she was still holding on to him like he was a lifeline, but the bones in her legs had liquefied. “I mean . . .” She shook her head. “Wow.”
He nodded. “Yeah. So to be clear, that wasn’t ‘a normal kiss’ or even ‘a nice kiss.’ It was a ‘wow’ kiss. Any questions?”
“Just one,” she said softly. “Can I have another?”
Joe didn’t have to be asked twice. His mouth immediately descended again, his fingers sliding into her hair to change the angle of the kiss to suit him. It was a controlled, alpha thing to do, but she had only one thought—nothing about the usually carefully, purposely leashed Joe was in control at the moment.
And she liked it.
She had no idea how long they went at it because she was in absolute heaven. Who knew that the man could use his preferred silent mode to communicate in a way that she finally approved of?
Only when she was completely breathless and about to strip him down to his birthday suit did she manage to pull back.
“Any more questions?” he asked, also a little bit breathless, which was more than slightly gratifying. Dumbly, she shook her head. His eyes softened and he gently he stroked his thumb over her bottom lip. “And FYI? Gib’s an idiot.”