The Devil sits in the Chair of the Valley 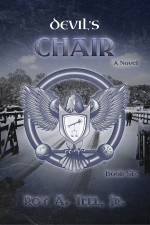 Rollins Industries is one of the nation’s largest distributors of organic food products, but Adam Osborn, a highly successful sales manager and the head of their sales department, has disappeared. Amelia Farrell, the head of human resources and Osborn’s love interest, has just terminated Gaston Reed, a senior salesman with a less than stable personality, after he made threats against Osborn and others in the company. What begins as a routine missing persons report quickly turns into anything but as LA County Sheriff Jim O’Brian and FBI Special Agents John Swenson and Steve Hoffman are drawn into the investigation when the Osborn investigation reveals that he was brutally murdered. Reed tops everyone’s list as the prime suspect; however, a deeper mystery begins to unfold as bodies pile up, and an unseen force is suspected of pulling the strings. Just when the men think they are closing in on the killer, a stunning development sends them careening into an unforgiving world of cruelty and torture — a world so depraved that only the Iron Eagle dare tread.

***Content Warning: The Iron Eagle Crime novel series contains mature subject matter, graphic violence, sexual content, language, torture and other scenes that may be disturbing to sensitive readers. This series is not intended for anyone under the age of eighteen, reader discretion is advised.***

My Review
I had grown immune to the brutal murders and vengeance dealt out by the Iron Eagle, so I was taken back when I experienced a gagging reflex moment at one gruesome scene. I regained my composer I kept on reading. This book instantly took me back to the first book. It was just as shocking and had the same type of intensity. My favorite thing about this book however was that I got to see Steve in action again. He had been out of commission for quite some time due to ALS. Steve brought back the human aspect to the story as he did not have the hardened shell like John and Jim. Although, Jim could never be on the level of John. The crime in this book was horrific but I was glad that it did not focus on young children. As much as I like these books the heinous acts that happen to the children are really rough to digest. Again, the Iron Eagle comes up on top. 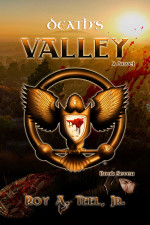 Internal Affairs has fired LAPD Officer Garrison Cantrell, and less than a day later, Mary Schultz, head of IA, is murdered. Throughout the department, Cantrell is known as an overall rat, and all fingers point to him as the killer. He’s quickly arrested with no evidence to support his guilt and is now the prime suspect. However, as Cantrell sits in jail, several fellow officers are murdered, in order, according to a hit list found at one of the crime scenes. One after another, the cop killings become more brazen and brutal than the one before, and Sheriff Jim O’Brian and FBI Special Agents Steve Hoffman and John Swenson must catch the killer before the last name is crossed off. As they delve into the investigation, the corruption and motivation for the killings becomes blatantly clear. Ultimately, it will be the Iron Eagle who puts an end to the murders while delivering his own justice to those who have committed heinous crimes while wearing a badge.


***Content Warning: While the Iron Eagle Series can be read out of order as a stand-alone book the reader should be advised that backgrounds and details of the characters may be confusing if readers choose to do so. The Iron Eagle Crime novel series contains mature subject matter, graphic violence, sexual content, language, torture and other scenes that may be disturbing to sensitive readers. This series is not intended for anyone under the age of eighteen, reader discretion is advised.***

Another great book in this series. However this book dealt with heinous acts to children. So as I have mentioned before this is hard to swallow reading about these acts. Luckily the scenes were far and few between and short. So I did not have to read about these acts. However the punishment that befell the men that committed the acts was befitting to them. However I wished that they had suffered longer. That is one thing that I did notice about this book is that it seemed a little rushed unlike some of the prior books in this series. Not as much time spent on the punishment dealt by the Iron Eagle.

I was happy to see John, Jim, and Steve working together again. It had been a long time due to Steve's illness of dealing with ALS. Yet, I found Steve still to be a fighter. The women behind the men were also strong presences in the book. One in particular was emerging and that was Jade. She is a wild card. I can't wait to see what she does in the next book.