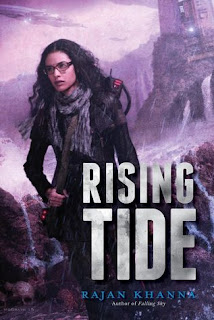 Ben Gold sacrificed his ship in an effort to prevent pirates from attacking the hidden city of Tamoanchan. Now Malik, an old friend turned enemy, has captured Ben and Miranda—the scientist Ben loves. With Miranda held hostage, Ben has to do Malik's dirty work.

Miranda has plans of her own, though. She has developed a test for the virus that turned most of the population into little more than beasts called Ferals two generations ago. She needs Ben's help to rescue a group of her colleagues to perfect the test—but first they must rescue themselves.

When a terrible new disease starts spreading across Tamoanchan and people start dying, it seems there’s something more sinister afoot. Then an old enemy attacks. Can Ben fight off the invaders? And will it be in time to save anyone from the disease?

I was intrigued by this book when I read the premise not knowing that it was book two in a series. This type of book really could be one that almost would/could not be read as a stand alone novel but I had no issues jumping right into this book. In fact, I read it in one sitting. The best part about this book is the world setting. Again having not read this first book in this series, I was surprised that the world felt like a mixture of steampunk with dystopia. Fantastic.

If there ever was an bad guy, Malik is that person. I just kept hoping something bad would happen to him through out the story. There was great animosity between him and Ben and Miranda. Then there are the Ferals. I would never want to get up close and personal with one. I am looking forward to the third book with the way this book ended. Also, I do plan to go back and check out book one.
Rajan Khanna