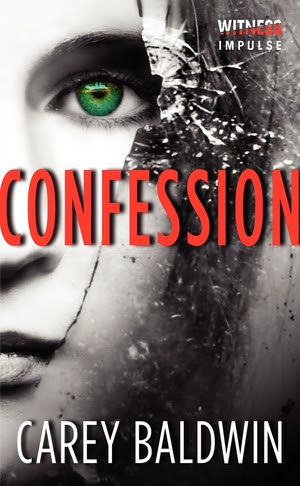 For fans of Allison Brennan and Karen Rose comes Carey Baldwin, a daring new name in suspense, with the story of a serial killer out for blood—and the only woman who can stop his reign of terror.

They say the Santa Fe Saint comes to save your soul—by taking your life.

Newly minted psychiatrist Faith Clancy gets the shock of her life when her first patient confesses to the grisly Saint murders. By law Faith's compelled to notify the authorities, but is her patient really the Saint?

Faith is going to need all her wits and the help of a powerful adversary, Luke Jericho, if she's to unravel the truth. Will Luke prove to be a safe harbor or a dangerous enemy, and can Faith unravel the truth in time to stop the Saint—or will she become his next victim?

About the Author:
Carey Baldwin is a mild-mannered doctor by day and an award-winning author of edgy suspense by night. She holds two doctoral degrees, one in medicine and one in psychology. She loves reading and writing stories that keep you off balance and on the edge of your seat.
Sign up for: Carey's New Release Newsletter
Visit Carey’s website: CareyBaldwin.com
Like Carey: Facebook

Luke Jericho halted mid-stride, and the sophisticated chatter around him dimmed to an indistinct buzz. Customers jamming the art gallery had turned the air hot, and the aromas of perfume and perspiration clashed. His gaze sketched the cut muscles of the woman’s shoulders before swerving to the tantalizing V of her low-back dress. There, slick fabric met soft skin just in time to hide the thong she must be wearing. His fingers found the cold silk knot of his tie and worked it loose. He let his glance dot down the line of her spine, then swoop over the arc of her ass. It was the shimmer of Mediterranean-blue satin, illuminated beneath art lights, that had first drawn his eye, her seductive shape that had pulled him up short, but it was her stance—her pose—that had his blood expanding like hot mercury under glass.

Head tilted, front foot cocked back on its stiletto, the woman studied one of Luke’s favorite pieces—his brother Dante’s mixed-media. A piece Luke had hand-selected and quietly inserted into this show of local artists in the hopes a positive response might bolster his brother’s beleaguered self-esteem.

The woman couldn’t take her eyes off the piece, and he couldn’t take his eyes off the woman. Her right arm floated, as if she were battling the urge to reach out and touch the multi-textured painting. Though her back was to him, he could picture her face, pensive, enraptured. Her lips would be parted and sensual. He savored the swell of her bottom beneath the blue dress. Given the way the fabric clung to her curves, he’d obviously guessed right about the thong. She smoothed the satin with her hand, and he rubbed the back of his neck with his palm. Ha. Any minute now she’d turn and ruin his fantasy with what was sure to turn out to be the most ordinary mug in the room.

And then she did turn, and damned if her mug wasn’t ordinary at all, but she didn’t appear enraptured. Inquisitive eyes, with a distinct undercurrent of melancholy, searched the room and found him. Then, delicate brows raised high, her mouth firmed into a hard line—even thinned, her blood-red lips were temptation itself—she jerked to a rigid posture and marched, yeah, marched, straight at him.

“I could feel your stare,” she said.

“Kind of full of yourself, honey.”

A flush of scarlet flared across her chest, leading his attention to her lovely, natural breasts, mostly, but not entirely, concealed by a classic neckline. With effort, he raised his eyes to meet hers. Green. Skin, porcelain. Hair, fiery—like her cheeks—and flowing. She looked like a mermaid. Not the soft kind, the kind with teeth.

“I don’t like to be ogled.” Apparently she intended to stand her ground.

He decided to stand his as well. That low-back number she had on might be considered relatively tame in a room with more breasts on display than a Picasso exhibit, but there was something about the way she wore it. “Then you shouldn’t have worn that dress, darlin’.”