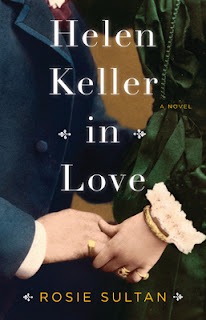 I learned about Helen Keller in school just like all kids my age. Did I see “The Miracle Worker” you bet I did! I was as awestruck by Anne Sullivan’s teaching methods and Helen’s “AHA” moment as you all were. Did a bit of research on dogs and Helen Keller because we were raising Akitas at the time and she brought the first one to America.


What I had no clue about were the restrictions placed on Helen Keller the person. She was never allowed to go anywhere alone (probably a good idea considering….) she couldn’t really have friends outside of her circle which always included Anne and, unfortunately occasionally her mother and she certainly couldn’t go out with a man. I also didn’t know that Anne had married a man who took most of Helen’s money and left Anne for another woman. I was astonished that no one ever mentioned Peter Fagan - Helen’s love and lover.

Anne has been stricken with tuberculosis and cannot carry on Helen’s tours which are bringing in less and less due to her Socialistic speeches. Something must be done and quickly as she is worsening every day. Nothing to do but hire a personal secretary to take care of Helen, correspondence, lectures, etc. She appeals to her ex-husband for help and he sends them Peter. Immediately Helen is aware that the atmosphere has changed. Anne isn’t fond of her replacement but Helen is becoming more so by the hour.

The tale of Helen’s secret life with Peter and also of her opinions on Socialism were a true surprise to me and this book is so well-written that sometimes I thought Helen herself had done it and the author, Rosie Sultan, does an exceptional job of educating us and enticing us to learn more! A book well worth reading and reading again just in case you missed something the first time.


Rosie Sultan earned her MFA at Goddard College and won a PEN Discovery Award for fiction, on the nomination of historian Howard Zinn. A former fellow at The Virginia Center for the Creative Arts, she has taught writing at Boston University, the University of Massachusetts, and Suffolk University in Boston. Her short story “Blue is Your Color, Dear” appeared in Other Voices. She lives with her husband and son in Brookline, Massachusetts.

Barbara R. said…
Thanks for posting this review! Great cover and the book sounds fascinating.