Barefoot in the Sand 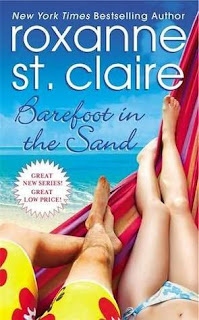 Lacey Armstrong and her daughter, Ashley are lucky to be alive. They have just survived Hurricane Damien. Now, Lacey and Ashley have to rebuld their lives. This means a brand new start for Lacey. She can finally build the bed and breakfast that she wanted.


Clay Walker is trying to make a name for himself and break away from his father's shadow. This is why, when Clay hears that Lacey needs a contractor, he knows he is the right man for the job. This will be his opportunity to show what he can do both in and outside the bedroom.
It has been a while since I have read anything by this author. Barefoot in the Sand is a fun, flirty, summer, beach read! It has your usual...hot, sexy male love interest, drama, and a happy ending. No surprises but sometimes not being suprised is a good thing. I know I am not complaining about Clay. He could have appeared in the nude or semi nude state though out this whole book. Some one that did not do it for me was David. I did not really see the point in him returning. Yes, I applaud him for wanting to have a daughter-father relationship but I was not buying into the romance aspect or David's effort of trying to start one with Lacey.

Lacey had to grow on me. I did not like all her negative attitude in the beginning. She was mean to Clay and I thought she was the one that was acting like a child and needed to grow up. Another thing is that I wanted to see more romance between Lacey and Clay. This was the whole reason for this book. While, I did appreciate that was not just a fluffy romance novel, I am just saying for me that I wanted more romance. Again, not a bad book and a nice start to a new series from this author. I will probably check out the next book in the Barefoot Bay series, Barefoot in the Rain.
Roxanne St. Claire