Fictionalizing real characters who existed in History demands all of a writer's imagination. Creating virtual pre-historic characters calls for that plus a tad more.

Mostly, verbal and pictorial records of a Historical character are available. The painting of the brutishly masculine Henry VIII and our school-days knowledge about his many wives, combine to form a mental picture about the famous regent in our mind even before we pick up a novel of the Tudor period. On the other hand, all we know about pre-historic characters is gleaned from skeletons, statuettes, weapons and scanty records etched on stone or clay tablets. Much is left to the writer to mould convincing human beings out of that information. 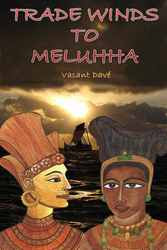 Gist of the Narrative

Harking back to Bronze Age Mesopotamia, it involves adventure, strife and love in young Samasin's life in which swift events chase him to a strange land 3,000 Km. across the sea.

Implicated in a foreigner's murder, he is saved from a gory sentence by a rare event which is actually recorded on clay tablets excavated in ancient Babylon. He flees to 'Meluhha', Indus Valley Civilization, in search of Siwa Saqra whose name was uttered by the alien before he died. There besides Siwa, he also meets two damsels. Anu is a Sumérian who poses as a Meluhhan because she is on a lookout for a couple of rogues for revenge. Velli, who wins his heart, is still devoted to someone who had jilted her. Interactions with all three lead Samasin on the trail of a diabolic trade that is ruining the lives of youngsters and women back in Mesopotamia.
Siwa Saqra

The character of Siwa, the merchant of Meluhha, was developed from a figurine of a bearded man who appeared to have passed a couple of fashion tips to Julius Caesar. He was named 'Priest King' by archaeologists. The artefact was discovered at an ancient site named Mohenjo-daro which is located in Pakistan. Dr. Shereen Ratnagar, herself an archaeologist and author, wrote: "He was creation of British archaeologists for whom Indus Valley Civilization was contrasting in its paucity of weapons with contemporary Mesopotamia. India was the land of Religion; hence priest kings were more appropriate than ruling dynasties." 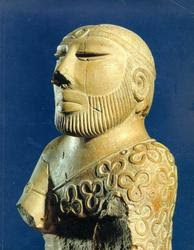 I agreed with Dr. Ratnagar's reasoning and decided to assign a different role to the unknown man. From his demeanour, he looked quite powerful. Who else besides a king wielded influence in the olden days? Those who contributed most in creating wealth, the merchants.

Discovery of strikingly similar jewellery on several sites in India and Pakistan (Indus Valley), Oman (Magan), Bahrain (Dilmun) and Iraq (Mesopotamia) proved that trade flourished among those countries during that period. Seals found at Ur indicated the existence of an Indus Valley merchants' colony there.Hence transforming the so-called 'Priest King' into a Meluhhan merchant who traded with Mesopotamia sounded quite feasible. That was how the character of 'Siwa Saqra' evolved.

Siwa trusts people rather to a fault. Some take a disadvantage of his trust, tarnishing his name and credit. In spite of such setbacks, he simply cannot change his behaviour. This aspect of Siwa's personality is gleaned from my personal experience of a close family member. He practised the moral of a story wherein a sage swimming in a river went on saving a drowning scorpion in spite of the insect stinging him every time. "It's an insect's temperament to sting; mine is to save a living thing. It's following its nature and I'm abiding by mine."
Other characters in the novel differ widely in their opinion about Siwa till all confusion is cleared towards the climax.
Velli 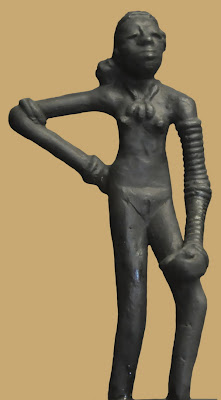 The female protagonist Velli is Siwa Saqra's daughter. Her character evolved from a statuette named 'Dancing Girl' which too was discovered at Mohenjo-daro. About it, Sir Mortimer Wheeler said: "There is her little Baluchi-style face with pouting lips and insolent look in the eye – a girl perfectly confident of herself and the world." Dr. Gregory Possehl added: "We may not be certain that she was a dancer, but she was good at what she did and she knew it."

With her head held high and an arm akimbo, the statuette represented to me the liberated women of the Bronze Age in both Indus Valley as well as Mesopotamia. From the baked clay tablets discovered in Mesopotamia, we know that women possessed the right to own property and to seek divorce from a marriage if it did not work.

In order to understand the issues faced by my characters, I studied the Adivasi tribes of India. Most of them still live in jungles and have missed the bus of technological progress. They have adapted marvellously to the risks inherent in their hostile environment. Velli's character draws substantially from that study.


In spite of being much younger, Velli is more worldly-wise and can read men better than her father. She smells a rat in his dealings with another merchant, and finds out the truth in her own way. It is another story that she is unable to caution him due to some dilemma of her own.

Like several famous women in History, Velli too turns virtually blind in love. As a result, her interactions with the protagonist Samasin keep him on the tenterhook till almost the end of the novel.

As an author, while I have tried utmost to breathe life into my characters, only the readers can decide how far I have succeeded. Should you desire to read a sample of my eBook Trade winds to Meluhha, you could download it at one of the following sites:
Amazon-Kindle: 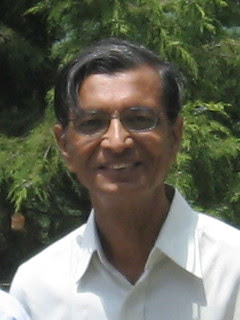 Vasant Davé is an electrical engineer from the University of Bombay. Besides providing Industrial Market Research services in India, he has also catered to corporate clients in Australia, China, Germany, Hong Kong, Israel, Singapore, the UK and the USA. His work called for extensive travelling throughout India and he could address his deep interest in archaeology by visiting numerous ancient sites during those tours.

Vasant started his first novel Trade winds to Meluhha in 2008 and took three and a half years to write. His technical background helped him to understand and apply historical, geographical, environmental and cultural nuances bearing upon the life during the 3rd millennium BC, the period in which it was set.
Facebook:
Twitter: