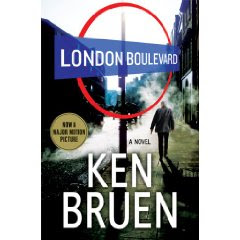 When Mitchell is released from prison after serving three years for a vicious attack he doesn’t even remember, Billy Norton is there to pick him up. But Norton works for Tommy Logan, a ruthless loan shark lowlife with plans Mitchell wants nothing to do with. Attempting to stay out of Logan ’s way, he finds work at the Holland Park mansion of faded movie actress, Lillian Palmer, where he has to deal with her mysterious butler, Jordan. It isn’t long before Mitchell’s violent past catches up with him and people start getting hurt. When his disturbed sister Briony is threatened, Mitchell is forced to act.


LONDON BOULEVARD will soon be a major motion picture starring Colin Farrell and Keira Knightley, with the directorial debut of William Monahan, the Oscar-winning writer for Martin Scorsese’s “The Departed.”
Ken Bruen

Anonymous said…
Pretty nice blog you've got here. Thanx for it. I like such themes and anything that is connected to them. I definitely want to read a bit more on that blog soon.
January 28, 2010 at 1:21 AM