The Son of Sam and Me 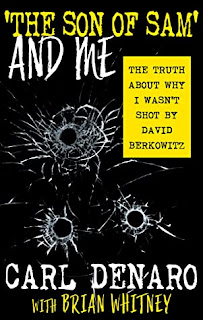 In 1976, a killer who called himself ‘The Son of Sam’ shot and killed a half dozen people and wounded as many more in New York City. During his crime spree, the madman left bizarre letters mocking the police and promising more deaths.

After months of terrorizing the city while garnering front-page headlines and international attention, a man named David Berkowitz was arrested. He confessed to the shootings, claiming to be obeying a demon that resided in a dog that belonged to his neighbor “Sam.”

Among the alleged victims was Carl Denaro. On the night he was shot, Denaro was hanging out with some friends at a bar when he met up with a woman named Rosemary Keenan. The couple left the bar and went to Keenan’s car to make out. However, a few minutes later, the windows of the car exploded as Denaro was shot in the head by an unseen assailant. Miraculously, Denaro survived the attack.

When Berkowitz was arrested, he was charged with trying to kill Denaro. However, there was a twist. Although he confessed to the other shootings, after his conviction Berkowitz denied attacking Denaro.

Now, after years of research, Denaro is convinced that Berkowitz was telling the truth, and that someone else tried to kill him.

In 'THE SON OF SAM’ AND ME: The Truth About Why I Wasn’t Shot By David Berkowitz, author Carl Denaro with co-author Brian Whitney (THE “SUPREME GENTLEMAN” KILLER, WildBlue Press) reveals his search for the truth and his shocking conclusion regarding the identity of the real shooter. In the book, Denaro also writes about his friendship and investigative partnership with Maury Terry, the author of THE ULTIMATE EVIL, which is considered the definitive case study on the theory that Berkowitz did not act alone.

My Review
I heard the name Son of Sam and a few details about the mass murders but honestly, I am not that familiar. Not to mention that this happened before I was born. However, I am a fan of true crime stories. I find them fascinating.
I have not read any of the other books surrounding the Son of Sam murders; therefore, I can't compare of comment on any of the other books; especially The Ultimate Evil by Maury Terry. Whom Carl Denaro formed a friendship with Maury. The theory that David Berkowitz aka Son of Sam did not shot Carl Denaro is not unbelievable. In fact, it is more plausible when you read and look at all of the facts and different witnesses descriptions.
If you are a true crime fan, you will want to pick up a copy of this book to read for yourself.
Brian Whitney Carl Denaro