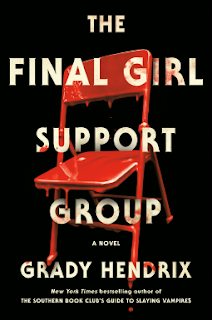 A fast-paced, thrilling horror novel that follows a group of heroines to die for, from the brilliant New York Times bestselling author of The Southern Book Club’s Guide to Slaying Vampires. In horror movies, the final girl is the one who’s left standing when the credits roll. The one who fought back, defeated the killer, and avenged her friends. The one who emerges bloodied but victorious. But after the sirens fade and the audience moves on, what happens to her? Lynnette Tarkington is a real-life final girl who survived a massacre twenty-two years ago, and it has defined every day of her life since. And she’s not alone. For more than a decade she’s been meeting with five other actual final girls and their therapist in a support group for those who survived the unthinkable, putting their lives back together, piece by piece. That is until one of the women misses a meeting and Lynnette’s worst fears are realized—someone knows about the group and is determined to take their lives apart again, piece by piece. But the thing about these final girls is that they have each other now, and no matter how bad the odds, how dark the night, how sharp the knife, they will never, ever give up.
My Review
My first introduction to this author was with Horrorstör. I could not read that book fast enough. From there, I wanted to read more. Yet, I got behind and missed reading several of this author's book until The Southern Book Club's Guide to Slaying Vampires. To be honest, I did not like The Southern Book Club's Guide to Slaying Vampires. In fact, I barely got a third of the way into that book when I DNF'd it.
So, when I saw this latest book, I had some hesitation. However, the premise was too good to pass up checking it out. Um...hello. I just finished reading this book. It did not disappoint. Fans of this author will be in for a real treat. I enjoyed this book so much that I am willing to give this author another chance to wow me with hopefully his next book as well.
I like the "campy" slasher film vibes this book is giving me. It references to so many famous movies like Jason and Scream. Horror fans alike will like this book. Lets cheer for the final girls. The ones that survived only to keep surviving every day.