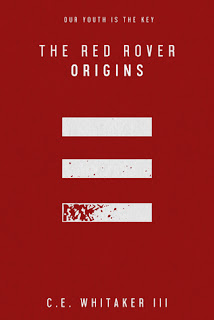 In the distant future, seven teenage explorers, bonded together by unspeakable loss, embark on an epic journey of discovery, wonderment and survival throughout our infinite universe, which will subsequently unlock the full potential of their minds, bodies and souls.

***Humanity has always possessed a fascination with the unknown. More specifically the universe.In the case of thirteen-year-old, ORION MOORE, it literally was all he had ever known. Since birth, Orion has lived amongst a group of over five hundred Earthlings on the Rover Base Alpha, a gigantic space-station that left the Earth decades’ prior in search of a new home. In a matter of weeks, the Base’s leadership put a plan into action that would send their Rover teams to foreign galaxies in hopes of securing a planet suitable for colonization.At the same time, Orion and his fellow classmates were expected to begin their exploration training, an intense military program designed to take them from neophytes to cadets. Sent away on the Red Rover, it was during this training exercise that these young people would learn the survival skills needed to cope with the harsh conditions that many of the uncharted worlds in the galaxy already possessed.Unbeknownst to Orion and his friends, their lives were about to be irrevocably changed forever, forcing them to band together in an epic adventure for survival. For them, this was only the beginning.Some say that destiny cannot exist without a journey… and for the members of the Red Rover, they’re about to see exactly how prophetic that statement really was.

I enjoy reading sci fi stories. Well I can tell you that this book is worth a look by sci fi fans. Not sure what the targeted reading audience is for this book/series but I will say that it readers for young adults. Not to say that adults would not enjoy reading this book. It just is my recommendation that this book would be better appreciated by the younger readers.

This is because this book was kind of giving me Ender Games vibes with the young cast of characters. Which the characters are engaging and likable. Ones that you are cheering for. In the beginning I was not sure about their teacher, Dr. Donovan Marius but he grew on me by the end of the story.

For most of the story, there really is not a lot of action happening. However, I was fine with this. Mainly due to Orion and his crew mates. It did give me a chance to get to know them. Yet, the last handful of chapters is where the story did pick up only to leave me seeking to want to read book two to continue this space journey.