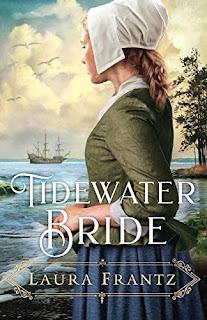 Selah Hopewell seems to be the only woman in the Virginia colony who has no wish to wed. True, there are too many men and far too few women in James Towne. But Selah already has her hands full assisting her father in the family's shop. And now she is in charge of an incoming ship of tobacco brides who must be looked after as they sort through their many suitors.Xander Renick is perhaps the most eligible tobacco lord in the settlement. His lands are vast, his crops are prized, and his position as a mediator between the colonists and the powerful Powhatan nation surrounding them makes him indispensable. But Xander is already wedded to his business and still grieves the loss of his wife, daughter of the Powhatan chief.Can two fiercely independent people find happiness and fulfillment on their own? Or will they discover that what they've been missing in life has been right in front of them all along?Bestselling and award-winning author Laura Frantz takes you to the salty shores of seventeenth-century Virginia in this exploration of pride, honor, and the restorative power of true love.

I liked this book. I was instantly transported back in time. It has been a long while since I have read a book about mail order brides. It was refreshing that Selah was in charge of the brides and the main character. Seeing things from a female perspective when the whole reason the brides were needed is due to men is nice. Plus, I did really like Selah.

Xander is the other main character. I like that he was not easily taken by all of the mail order brides. The romance between him and Selah is sweet and real. It felt even more real because it was slow to grow. I thought that they were equals.

While, I enjoyed this book; I felt like it moved at a slow pace. There were times that it seemed like the story was just kind of repeating itself in the beginning. The half way point for me is where the story changed pacing and did pick up. From there it was easier to read and keep my interest.