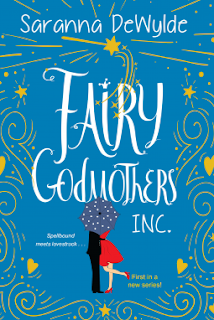 Armed with her trademark mix of quirky charm, witty comedy, and sexy paranormal romance, Saranna DeWylde takes readers on a rollicking ride through twisted fairy tales and towards the ultimate Happily Ever After in her first Fairy Godmothers, Inc. Series installment. Ever After is a town that runs on magic, and that magic is fueled by love. So when the three fairy godmothers in charge of Ever After's magic supply realize the town's power has started to wane, they conspire to transform Ever After into a premiere wedding destination in hopes of attracting a major infusion of love to the town...If love is the source of all the magic in the universe, and the town of Ever After, Missouri, is the epicenter of enchantment, then the locals are in dire need of a reboot. At least according to resident fairy godmothers Petunia, Jonquil, and Bluebonnet. Their solution? Blow a bit of fairy dust in the direction of those in need of romance. . . . What could possibly go wrong?SOME KIND OF AWFUL . . .Lucky Fujiki's first name is a cosmic joke. Her luck is so bad, even the number seven steers clear of her. But when her adorable godmothers ask for a favor, Lucky can't say no. After all, it's just a little one--to save the world's magic. Lucky can already feel the bad juju waiting to strike. And her mission is even worse than she imagined: to promote Ever After as a wedding destination by faking a marriage to her first love and long-time ex, Ransom Payne--he of the Embarrassing Incident that neither of them will ever live down . . .OR ALL KINDS OF WONDERFUL?Ransom Payne has spent years building an impressive new reputation for himself, and now his godmothers want him to pretend to wed the one girl he'd like most to forget? Sure, weddings in Ever After could be a huge boon for his chocolate business, but risking more up-close-and-personal time with Lucky? Considering the stakes, it's a curse he'll have to bear, at the risk of being humiliated--or perhaps, bewitched
My Review
This is a fun, charming, witty read. I had so much fun reading this book. The fairy godmothers were my favorite and the true stars of this book in my opinion. Sorry Lucky and Ransom. Although, Lucky and Ransom did have plenty of awkward moments that were hilarious. You would think with a name called "Lucky" that you would be lucky but that is not the case. In fact, it is quite the opposite. Lucky is more "unlucky". A funny moment is when Ransom got hit in the face by a cherry. Yet, Ransom and Lucky were determined to prove that lucky was not unlucky. They made a cute couple. All of the other characters in this book are also very enjoyable. I love when this happens. I look forward to reading more books in this series. I know it is magical as it helped me out of my reading slump.