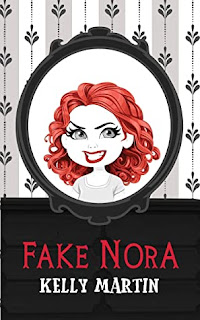 The sign over the covered antique mirror said DO NOT TOUCH. Twelve-year-old Nora wished she had listened.

Mirrors reflect what is in front of them, but what happens behind the glass-to the reflections themselves? Nora finds out when her own reflection, aka Fake Nora, changes places with her one night. Nora is shoved in a place that looks exactly like her house with no echoes, dull lights, and muted sounds. It isn't her home at all, simply a shell of a place she loves.

Fake Nora is living her best life in Nora's house, feeding on the fear of her little brother while no one else at the house knows anything is wrong.

Inside "reflectionland," Nora meets thirteen-year-old Jesse, who has been stuck in his mirror since the forties, and he warns her that they aren't alone in the house. There are others sneaking around, known as the bad ones-spirits of people who gave up after vanishing in the mirror.

Refusing to stay a reflection forever, Nora conjures a plan to escape, but Fake Nora isn't about to give up her life in Nora's home. And Jesse? He could become a bad one forever.

My first reason to this book was that it was giving me "Insidious" vibes. You know the movies, where the young boy, Dalton falls into a coma but the family discovers it is not really a normal coma. Dalton is stuck in a dreamworld where there are evil spirits wanting to get out and take the place of the person who is stuck in the dreamworld.

However, at the same time this book was also giving my Goosebumps vibes. This is because this book is geared towards young adult readers. So it is not too spooky to give the reader nightmares but spooky enough to give you some goosebumps and avoid getting too close to mirrors.

I flew through this book. A very fast read. Nora is a fighter. She did not give up hope. The other characters in the story that I enjoyed was Nora's brother, Nolan and Jesse. I agree with another reader that I would like to see Jesse featured in his own book. Readers young and old both will enjoy reading this book. Fake Nora is a book that you will want to pick up to add to your horror book collection!