The Spa at Lavender Lane 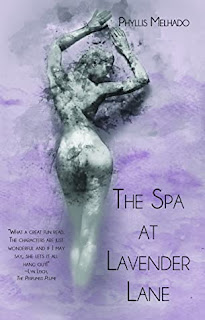 NEW YORK – Take a peek behind the curtain of wealth and glamour in Phyllis Melhado’s sassy and sultry beach read.
The guests who arrive for a 10-day stay at the nation’s premier spa at Lavender Lane seem to have everything a girl could want: high-flying careers, social and financial prowess, access to the top fashions and beauty products, and even a dash of fame. Yet each woman is in need of rejuvenation from insecurities, flatlined business motivation, or failed relationships – problems that will require more than the spa’s renowned anti-aging quince cream to fix. As the women learn to trust one another, they each figure out how to take a second chance at life, and reclaim what’s most important.
“The Spa at Lavender Lane” (Black Rose Writing, May 7, 2020) follows Nadia Demidova, legendary doyenne of the fabled Palm Springs getaway and her difficult guests: a burned out Fifth Avenue retail executive, a striking former model and Chicago socialite, an overweight Texas housewife and her beautiful teenage daughter, and a CEO who, unhappy with recent plastic surgery, remains secluded in her room. Fortunately, Madame Demidova can rely on her Assistant Director to help manage the herd – not knowing that this valued employee is poised to make an audacious move. And when an uber-eligible man unexpectedly arrives on the scene, lust, ambition, and competition for the spa’s ownership are thrown into the already gossip-worthy mix.

I thought this book had some charm to it. It reads like a cozy mystery. Which fans of cozy mysteries may want to pick up a copy of this book and try it out for themselves. There is no gory details or foul language.

While, I got an instant visual of all of the various characters and the story playing out in my head, I did struggle to find that connection with each of the characters. Thus in turn the was not as invested in the overall story. There were times when I was not as focused on the story. However, other times I would read pages at a time. Sadly, this book and I did not jive together.

PHYLLIS MELHADO: The former Vice President of Public Relations for Estee Lauder, Phyllis Melhado has had her work published in Town & Country, Cosmopolitan, and The Scarlet Leaf Review. She has also ghosted a best-selling beauty book as well as a nationally syndicated beauty column. She earned her Master’s degree in Communications from NYU and lives in New York City. The Spa at Lavender Lane is her first novel. To learn more about Phyllis and her work, visit https://www.phyllismelhado.com.

An Interview with
PHYLLIS MELHADO
I actually had the idea years ago. When I was in the thick of my job – which was almost all of
the time – I rarely had time for a lengthy vacation, and going to a spa was a great way of relaxing
and recharging. Spas were my escape of choice, sometimes just for a long weekend to a place in
Connecticut I liked. When I left Estee Lauder, I wanted to decompress and get my head ready to dive into the writing life. I went to Canyon Ranch, as I have a few times over the years. It’s a wonderful place for getting your head and body together!!
That’s how the idea started. I actually thought of the character of Nadia Demidova and her
spa quite some time ago at a writers conference and wrote the first paragraph then, which,
amazingly, has changed little. The story had not really come to me then in any meaningful way and I tucked the idea away. When I started writing in earnest, I went to screenplays and back to books and then to screenplays again.
This is a book about women and their experiences and their hopes and dreams. I met so many women during my career – privileged women in New York social circles, working women and stay-at-home mothers, and women who did it all out of necessity or choice when I travelled the country to do promotions.  I worked in a world of women promoting products for women, so even when there were men in the picture – and there certainly were, both personally and professionally, it’s always been a woman-centric world in which I lived.
I love to engage with people and am blessed with many friends – so many of whom I met while working at Estee Lauder. I like people and am generally intuitive about them to the point where people have always come to me for advice.  I’m a really good listener. Perhaps in my next life I’ll become a shrink!
Second chances are all around us!  And so many women are opting for them – finding new careers, choosing late motherhood, going back to school, finding love a second or even third time.  To be honest, when I started writing the book and decided on a spa as the setting, I did not set out to write a book about second chances, but because it was my own experience, I suppose it infused my subconscious. But I do know that women often go to a spa to re-think their lives.
I knew my whole life that I wanted to be a writer. But I was also drawn to the world of advertising and promotion. And I was dazzled by the cosmetics industry. Who didn’t want to look like Karen Graham, the extraordinary beauty who personified the Estee Lauder brand for so many years, and live in the dream world of an Estee Lauder ad with its beautiful clothing and elegant settings.  I remember buying my first Estee Lauder lipstick – Tender Lip Tint, it was called. I was a copywriter in a small ad agency. I think it was then that I set my sights on my dream job.
Every now and then a very young writer comes along who absolutely wows everyone with his or her talents and abilities to see into human nature as well as the nature of life.  For most of us, I think it takes living and learning to craft a story and to create characters that resonate. I hope I have done that with the story and the women in The Spa At Lavender Lane.
Modeling may appear totally glamorous, and it is, but modeling is hard work, make no mistake.
I tried it for a bit and soon learned that I wasn’t cut out for it. Like some cliché out of an old garment center novel, a little guy with a cigar put his hands on my breast and when I asked him what he was doing, he said “adjusting the material.” I shoved him away and told him not to touch me to which he answered the classic “You’ll never work in this town again.” Really. That’s exactly what he said! It was after that I went to graduate school and got my MA.
There were always drugs and coked up photographers and dirty old men. Alas, I don’t think it’s changed all that much. I know people like Eileen and Jerry Ford, of the famous Ford Modeling Agency, tried to protect their young models, as others did as well, but I know some girls took the bait. I am told those things are still going on today, although I am no longer in that world.
The terrific women who were the Estee Lauder models with whom I worked, were a world apart from that, as were any of the creative people with whom we worked…Karen Graham, Willow Bay, Paulina Porizkova, Elizabeth Hurley are all marvelous, hard-working intelligent women. And Victor Skrebneski, who did all of our photography, has no peers, then or now, either as a man or an artist.
I would love to write a sequel to The Spa At Lavender Lane and have some ideas, but there’s another story I have to get out there. It’s very different from this book and takes on a completely different tone. Tentatively titled Bridget and Anthony: A Love Story, it’s based on the true story of a brilliant and courageous young woman who follows her dream to become a world-class doctor, despite being diagnosed with serious breast cancer while still in medical school – and the extraordinary young man she marries who sacrificed his own dream to make hers possible. Their story will tug at your heart and fill you with joy even though it deals with a difficult issue.
After that, I will turn my attention back to the ladies at Lavender Lane and maybe the handsome man who invaded their midst when they least expected it!!