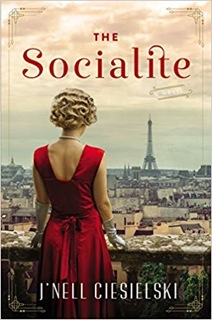 Glamour, treachery, and espionage collide when an English socialite rushes to save her sister from the Nazis.
As the daughter of Sir Alfred Whitford, Kat has a certain set of responsibilities. But chasing her wayward sister, Ellie, to Nazi-occupied Paris was never supposed to be one of them. Now accustomed to the luxurious lifestyle that her Nazi boyfriend provides, Ellie has no intention of going back to the shackled life their parents dictate for them—but Kat will stop at nothing to bring her sister home.
Arrested for simply trying to defend himself against a drunken bully, Barrett Anderson is given the option of going to jail or serving out his sentence by training Resistance fighters in Paris. A bar owner serves as the perfect disguise to entertain Nazis at night while training fighters right below their jackboots during the day. Being assigned to watch over two English debutantes is the last thing he needs, but a payout from their father is too tempting to resist. Can Barrett and Kat trust each other long enough to survive, or will their hearts prove more traitorous than the dangers waiting around the corner?

I loved this book. Right from the moment I picked up this book until the last page, I was swept up into this world and the lives of Kat, Ellie, and Barrett. Kat is definitely the voice of reason. Whereas, her sister, Ellie was living in a bubble. The war was on their doorstep and they were walking through it but yet Ellie just wanted to live in the moment with planning parties and enjoying the luxury of dating a high ranking military man. Barrett is a gentleman, not to mention has tons of patience. He was tested over and over again but he never fully gave in to his anger. There is a bit of romance between Kat and Barrett. However, it was not the man focal point of the story. Which I liked a lot as this story is a historical story and not a romance one. I recommend this book to anyone who loves to read historical fiction books. J'Nell Ciesielski swept me away into the pages of this story with a rich storyline and engaging characters with The Socialite.

Sara Strand said…
This is probably the best description of the characters I've read yet! Thank you so much for being on this tour. Sara @ TLC Book Tours
May 13, 2020 at 1:20 PM