Love is a Rebellious Bird 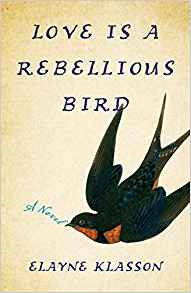 SANTA YNEZ, California – In her bold fiction, Elayne Klasson dives into what it means to sacrifice everything you’ve ever known for a chance at happiness. Love is a Rebellious Bird (She Writes Press, November 12, 2019) follows Judith, a smart and strong woman, who is driven to pursue a man she has loved since childhood. Klasson brings forth the challenging questions of who is it we love and why do we love these people from the perspective of a woman who’s lived with these questions for six decades.
Toward the end of her life, Judith asks these questions, trying to understand why she chose Elliot Pine to love. Why, for sixty years, did she persist in loving someone who never gave as much as he was given? In her quest for understanding, she writes her story to this exceptional man. Meeting as children in Chicago, they move to opposite coasts. Elliot embarks on a remarkable legal career in Washington and New York while after tragedy, Judith raises her children alone in California. Coming together again and again throughout their lives, their love is never equal, Elliot defining the terms of the relationship.
Her feelings for this man cost her, impinged on every other relationship in her life: friends, her two husbands, even her three children. After sixty years, however, it all changes. Judith makes one more profound sacrifice, finally achieving a sort of long-awaited happiness in her love.
ELAYNE KLASSON is the author of Love is a Rebellious Bird. She went to university and graduate school in the Midwest—Ohio State University and the University of Michigan with a Masters of Public Health and then a PhD in Psychology. She has lived in Barbados, West Indies, first working as a health-care consultant with Project Hope and the U.N. in the Caribbean; then, several decades later, as a writer and columnist for the Barbados Daily Nation. Her professional career has largely been in academia at San Jose State University, with her research and clinical area of expertise being the severely mentally ill. A recent transplant to the Santa Ynez Valley, she is a popular lifestyle newspaper columnist. Elayne has also appeared on San Francisco public television as a restaurant critic. She is married to David, a scientist. Between them, they have five children, all grown. For more information, visit https://www.elayneklasson.com/.

An Interview with
ELAYNE KLASSON
1. Can you tell us where the title of this work came from?
The title comes from the opening line of The Habanera, the aria sung by Carmen in Bizet’s great opera of the 1870s. Flamboyant Carmen sings of how you can’t control love. When love does come, you may not want it. However,  “...you call him quite in vain if it suits him not to come…”. There is also a lyric in The Habanera saying “love has never, ever, known a law…” which is fitting and ironic as Elliot, the object of Judith’s love, is a prominent lawyer, for whom the law serves as a type of religion. This is actually the first and fourth title! I abandoned it originally after a friend in publishing dismissively said, “no one likes opera.” But then, after trying two other titles, went back to the original. I love opera.


2. Why did you choose to write this novel in second person – to have Judith speak directly to Elliot?
I found that after the book was nearly complete, I questioned who Judith was telling her story to. I wasn’t happy with this being told to an anonymous audience. I thought Judith could finally be honest with Elliot by telling the story to him..addressing him even if there was a possibility he might not hear her. She had, for so long, been afraid to express her true feelings to him. If Portnoy hadn’t already done it so perfectly, I might have had it be in a long therapy session!
3. Childhood love is often dismissed as naive, but Love is a Rebellious Bird follows lovers from childhood throughout their mature lives. Why do you think it’s important we discuss and acknowledge love at every stage of our lives?
I agree that childhood love is often dismissed. Yet, I think these formative relationships in pre-adolescent and teen years are crucially important to who we become and how we view ourselves in relationship to others. I am in such awe of Elena Ferrante’s My Brilliant Friend and the subsequent 3 books in her Neapolitan Quartet. She explores relationships formed in the character’s early years and how this put a deep mark on the women the girls in the quartet become. In Love is a Rebellious Bird, Judith had such admiration and adoration and compassion for Elliot as a kid, no one else could ever match up. She says in the novel that her feelings for him, even when they were young, become the definition of what love is. Similarly, the rejection she experienced from Elliot and others in their elementary and high school years, left marks on her, perhaps forever. I think the sometimes cruel rankings kids give each other, may stay with us. I went to my 50th high school reunion recently. It was a large Chicago high school and a surprisingly well-attended event. And while there were many surprises, the crowds and cliques were still firmly in place.
4. You have lived in a variety of locations over the years, from the midwest, to Barbados, to California. Has this sort of worldliness influenced your approach to writing or the way you understand your characters?
Perhaps the years in the midwest, the Caribbean, and northern and southern California has convinced me of the importance of our universal search for love. I’ve been a columnist in both the Caribbean and California, and it is obvious that everyone wants to be “seen” and understood through intimate relationships. I interview people for most of my columns and I know how much people (old, young, disabled, athletes, professionals, working class) want to be heard and how rarely we listen deeply to each other. I also know that coming into people’s lives at a particular age means we never get to know the person they were in earlier stages. My husband and I recently moved to a different area of California, four hours south of the previous town we’d lived in. I feel sad that no one really knows who we were earlier, just as I can only guess at the rich and juicy lives of the people we are meeting now who are in the later stages of their life (sixties, seventies, beyond). Who were the babes? The powerful men? What were the tragedies? The accomplishments?
5. While this is your debut novel, you have extensive experience a columnist and journalist. What was your experience in this transition?
I have been writing fiction for twenty-five years. Plowing away at it. My idea was that if I kept writing, I’d keep getting better and eventually, I’d get read. I won a few awards, writer’s residencies, but got very little recognition. But I kept writing fiction because I love doing it. I love creating characters and populating a world with them. But novels take years to complete, and I live inside them. Writing columns and features is another matter completely. It allows me to finish something in a few hours and have that sense of completion and see it in print the next week. It also allows me to broaden my world by talking to real people..not just the ones in my head!
6. Do you find that your background in psychology and studying human behavior has aided you in your writing, especially your fiction writing?
I really do love talking to people and trying to figure out what makes them tick. The act of giving someone your undivided attention, is a successful one in both a therapeutic sense as well as in writing and in life. For years, I taught a university course called, “Frames of Reference,” in which I would lecture psychology students on the various therapeutic schools: analytic, behavioral, humanistic. But I always stressed that the most successful therapeutic method is to truly listen deeply, giving the person the honor of being really paid attention to. I think this works in newspaper interviews and in fiction writing. In fiction, I try to really listen to the character’s voice and what they might be saying and feeling. Sometimes the characters come from real life as I remember them, sometimes they are completely imaginary. But I try to listen respectfully.
Dr. Elayne Klasson

In this world of constant competition, it is difficult to survive as a self-pub author. Every detail matters and getting reviews is a big part of my marketing strategy. I ordered a few reviews from https://usabookreviewers.com/christmas-gift to get more visibility and sales this Christmas season..