The Turnip Princess and Other Newly Discovered Fairy Tales + Giveaway 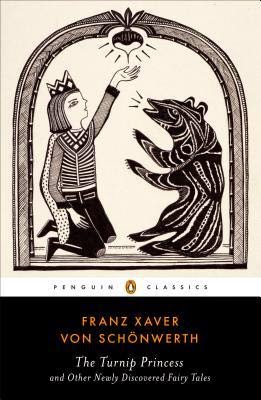 A rare discovery in the world of fairy tales - now for the first time in English. With this volume, the holy trinity of fairy tales - the Brothers Grimm, Charles Perrault, and Hans Christian Andersen - becomes a quartet. In the 1850s, Franz Xaver von Schönwerth traversed the forests, lowlands, and mountains of northern Bavaria to record fairy tales, gaining the admiration of even the Brothers Grimm. Most of Schönwerth's work was lost - until a few years ago, when thirty boxes of manu­scripts were uncovered in a German municipal archive. Now, for the first time, Schönwerth's lost fairy tales are available in English. Violent, dark, and full of action, and upending the relationship between damsels in distress and their dragon-slaying heroes, these more than seventy stories bring us closer than ever to the unadorned oral tradition in which fairy tales are rooted, revolutionizing our understanding of a hallowed genre.

'Schönwerth's tales have a compositional fierceness and energy rarely seen in stories gathered by the Brothers Grimm or Charles Perrault' -The New Yorker 'Schönwerth's legacy counts as the most significant collection in the German-speaking world in the nineteenth century' - Daniel Drascek, University of Regensburg Franz Xanver von Schönwerth (1810-1886) was born in Bavaria and had a successful career in law and the Bavarian royal court before devoting himself to researching the customs of his homeland and preserving its fairy tales and folklore. Maria Tatar chairs the program in folklore and mythology at Harvard, and has edited and translated many collections of fairy tales. Eeika Eichenseer is a historian and preservationist working for the Bavarian government and the director of the Franz Xaver von Schönwerth Society.

Ok, so I found this to be a great anthology of short stories. Each one just as good as the last. Sometimes I found some stories not as likable or half of the book this way. SO then I feel cheated or let down. Which I did not feel while reading this book. I was familiar with a lot of the stories but a bunch I was not familiar with so I was intrigued by those ones. Yet at the same time it was nice to rediscover and reconnect with the old ones as well.

Not every story is warm and fuzzy either. Some where really dark which I really digged. I can't pick just one or two or even five stories. Because as I said before, I enjoyed them all. So if you like fairy tales, then treat yourself to this book.

I have 1 copy to give away. US only. Leave a comment with your email. Winner picked March 3rd
Franz Xaver Von Schonwerth

TIffany said…
This is so cool - I can't wait to add this to my shelf! Thanks for the giveaway!