Book Tour: Secrets from the Heart 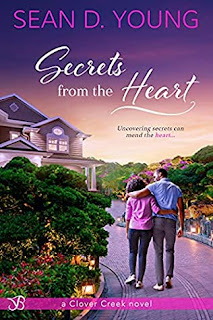 Taking over her family’s charming and historic Red Rose Inn is a dream for Kira Davis--even if it means the extra stress of knowing the entire Davis clan is watching her every move. But ignoring her family’s wishes and hiring too-handsome Franklin Bennett as her temporary new manager might be a huge mistake...given their families’ decades-long feud.Yet attraction still sparks between them, proving to ex-army engineer Franklin there’s something real beneath the surface. Something hopeful. Something unmistakable. But pursuing Kira could prove dangerous for a man with an uncertain future.Now Kira and Franklin are caught between an ancient family feud and their feelings for each other. The only way they can love each other is by unraveling the terrible truth about what happened back then...and hope that love is strong enough to mend the break from so long ago.

I liked this book. I found it to be a charming read. I liked that Kira was willing to give Franklin a chance; despite their families not liking each other. Almost kind of like a Romero and Juliet type of story. When it came to the sparks of chemistry between Kira and Franklin, I could feel them. Yet, the romance was a slow building one. Which in their case, I don't blame them, and it was more believable that it was not an "instalove".

While I did like this book, I do have to admit that my attention span kind of went in waves. In the beginning, I was into this story, and it did stay that way for about a third of the way into the story. Then for some reason my interest kind of waivered a bit and I found myself a few times have to reread sections. Yet, it did pick up again toward the end. Secrets from the Heart is a sweet read.