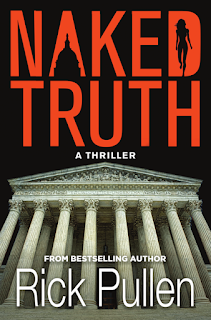 Synopsis: REPORTER BECK RIKKI again confronts the deceptions and lies of the rich and powerful in America when he is invited to meet with the chief justice of the United States, only to have the jurist show up dead. As he did in his previous outing in Naked Ambition—the ﬁrst in Rick Pullen’s compelling thriller series—Beck is relentless in pursuing the truth. Yet, as he peels back the layers, he is unaware of the sleight of hand diverting his path. After all, in the real world of power, how much of the iceberg of truth can really be uncovered?


Author bio:   Career journalist Rick Pullen was an investigative reporter before becoming a magazine editor and publisher. His journalism career includes two magazine startups and more than 70 awards for writing and design. He is a member of the Folio 100-the 100 most inﬂuential people in magazine publishing-and runner up for editor of the year. Although disgruntled subjects of his investigations often accused him of writing ﬁction, Rick never attempted it until 2011 when he began writing his ﬁrst political thriller, Naked Ambition. Published in 2016, Naked Ambition became an instant Amazon bestseller. He followed that up with a serial, The Apprentice. To learn more about Rick, visit: www.rickpullen.com
Rick Pullen