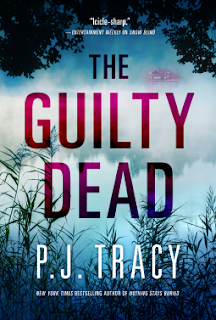 Gregory Norwood is Minnesota’s most beloved philanthropist, and the story of his son’s overdose was splashed across the front page of all the papers. When a photojournalist sets out to get a candid shot of the highly successful businessman on the one year anniversary of his son’s death, he’s shocked to find Norwood dead with a smoking gun in his hand. The city is devastated, and Minneapolis detectives Leo Magozzi and Gino Rolseth are called in to handle the delicate case. It should be open and shut, but something is not right. Norwood's death is no suicide. With no suspects and an increasing tangle of digital evidence that confounds the Minneapolis Police Department’s most seasoned cops, Magozzi calls on Grace MacBride, Monkeewrench Software’s founder and chief computer genius and the soon to be mother of their child together. She and her motley crew of partners begin to unravel connections between Norwood’s death and an even larger plot. Norwood wasn’t the first, won’t be the last, and by the end, may be just one of many to die. The breakneck, high stakes race to find his killer and save the lives of hundreds make P. J. Tracy's THE GUILTY DEAD her most outstanding novel yet.


It has been quite a long while since I have read a Monkeewrench book. I used to read them pretty regularly. I don't know what happened as I did enjoy the books that I read. After finishing this book, I will make sure to not let long periods of time lapse between books. It was like I hadn't really left. Instantly, I was able to jump right into this book with no problems. The characters embraced me as did I to them.

Magozzi and Rolseth make good partners. They work very well together. Then, there is Magozzi and Grace's relationship. I like them together. They made a good couple. Yet, I like that their relationship did not distract from the main storyline. Which was full of a good steady pace with plenty of action. There wasn't really any down time, thus I really liked this factor. It was made better because of the characters. Fans of this series will enjoy this latest offering in this series.
P.J. Tracy