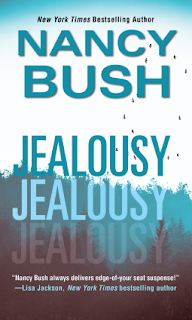 HATRED LEADS TO OBSESSION . . .
It’s taken time for the plan to unfold, years spent waiting, watching, hating. . . . And after the first victim, the killing gets easier and easier . . .

OBSESSION LEADS TO JEALOUSY . . .
The Crissmans, owners of Crissman & Wolfe department store, were once one of Portland’s most powerful families. There’s still enough fortune left to sow mistrust between Lucy, her bohemian sister Layla, their brother Lyle, and his grasping wife Kate. When a charity event at the Crissman Lodge ends in a fatal poisoning, Lucy becomes a prime suspect. But the truth is even more twisted, and Lucy can’t be sure which of her family is being targeted . . . or who to fear.

AND JEALOUSY LEADS TO MURDER . . .
Renowned defense attorney Dallas Denton has been hired to clear Lucy’s name, unaware of the secret that ties them together or of the deep cracks in the Crissman legacy. Someone is ready to eliminate every obstacle to get what they most covet, and prove that envy runs deeper
than blood . . .
My Review
It has been a long while since I have read anything from this author. Thus, when I had the chance to pick up a copy of this book, I thought now is a good time to read this author again. The story started out fine. It had some build up in intensity. However, my issue was not truly with the story itself. Although, the lack of intensity and a slow pace didn't help. No, my issue was with the characters. There was nothing interesting about them. In fact, I found the characters to be one dimensional, which was a turn off. After getting a third of the way into the story; I did jump ahead and found after reading some more that I had no interest in finishing the book.
Nancy Bush