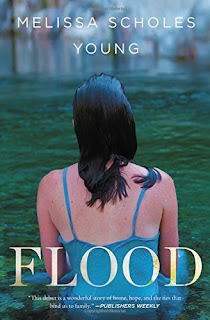 A sparkling debut set in Mark Twain's boyhood town, FLOOD is a story of what it means to be lost…and found.

Laura Brooks fled her hometown of Hannibal, Missouri, ten years ago after a historic flood and personal heartbreak. Now she’s returned unannounced, and her family and friends don't know what to make of it. She says she's just home for a brief visit and her high-school reunion, but she's carrying too much luggage for that: literal and metaphorical. Soon Laura is embroiled in small-town affairs—the contentious divorce of her rowdy best friend, Rose; the campaign of her twelve-year-old godson, Bobby, to become the town's official Tom Sawyer; and the renewed interest of the man Laura once thought she'd marry, Sammy McGuire.

Leaving town when she was eighteen had been Laura’s only option. She feared a stifling existence in a town ruled by its past, its mythological devotion to Mark Twain, and the economic and racial divide that runs as deep as the Mississippi River. She can’t forget that fateful Fourth of July when the levees broke or the decisions that still haunt her. Now as the Mississippi rises again, a deep wound threatens to reopen, and Laura must decide if running away once more might be the best way to save herself.

I liked the tone of the story from the...location to the theme. I was feeling the vibes of the Mark Twain aspect. In fact, I liked it so much that I could not wait to see how this story would all play out. Yet, it kind of became apparent that this would not be the case for me. Despite liking the tone of the story, it suffered from the lack of character emotions that I was missing. In my case I hard trouble connecting to the characters. When this happens it makes for difficult reading. While, I tried to let this slide hoping that this would improve, it didn't. I could not finish reading this book. I might give it a second chance in the future.
Melissa Scholes Young

I learned so much from this!