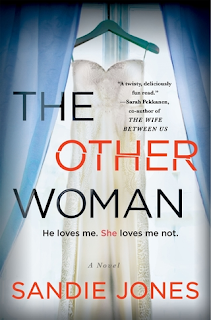 A deliciously disturbing, compulsively readable debut domestic suspense--prepare to meet The Other Woman: there’s nothing she won’t do to keep you away from her son ...

But lurking in the shadows is a rival; a woman who shares a deep bond with the man she loves.

Emily chose Adam, but she didn’t choose his mother Pammie. There’s nothing a mother wouldn’t do for her son, and now Emily is about to find out just how far Pammie will go to get what she wants: Emily gone forever.

The Other Woman is an addictive, fast-paced psychological thriller about the destructive relationship between Emily, her boyfriend Adam, and his manipulative mother Pammie.

Pammie is the mother in law from hell. She is the monster in law. The way she acted and talked to Emily was awful. Emily was a saint to put up with Pammie as long as she did.

Despite not liking the characters, I still continued reading this book until the very last page. I was interested in the story. When all secrets were revealed I actually was taken back in shock. It all made perfect sense in the end. Yet, I was disappointed that it seemed to be a little too late. While, this is not the best showing for new author, Sandie Jones; I am interested to see what this author comes out with next. I think that with time and better characters there will be a hit.
Sandie Jones