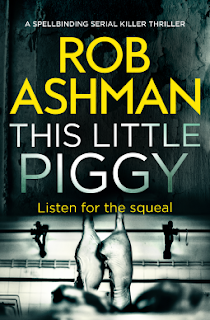 Kevin Palmer is a regular sort of guy, or he was until his life fell apart. His wife, his money, his business and his reputation are all taken away from him. He tries to fight back and ends up in prison.

There he concocts elaborate fantasies to wreak vengeance. He is sent to work in an abattoir and the final piece of the jigsaw falls into place with chilling consequences. Then a cruel twist of fate changes everything.

DI Rosalind Kray is battling her own demons having returned to work following a brutal attack. She finds herself on the trail of a sick and twisted killer and cracks the macabre pattern of murders. But her boss is unconvinced.

Kray has Palmer squarely in her sights. But he has other ideas …

Can Kray break him in time to save the final victim?

Time is running out.
My Review
This is my first book from author, Rob Ashman. You can say it was a smash hit with me. It is gritty and dark without being too gory. Although, I am not against gore. Yet, the fact that there is just enough details about the murders without being too in depth is great. It allows my mind to go into over drive.

Then there are the main leads, Kray and Tavener. I say leads as both Kray and Tavener worked really well together. Additionally, I felt that they had equal parts in this book. Although, I am more partial towards Kray. Just because she is tough as nails and smart too. Plus, she has a bit of a mouth on her and she is not afraid to speak her mind.

I don't know if I will think of the rhyme about the "Three Little Pigs" in the same way after reading this book. I look forward to reading the next book but while I wait I am going to go back and check out the first one. This book is a must read.
Rob Ashman