Hanging with Darla and Sister Surrendered 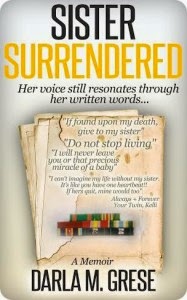 Title: Sister Surrendered
Author: Darla M. Grese
Publisher: Darla M. Grese
Pages: 210
Genre: Memoir
Format: Paperback / Kindle
When you’re a twin, loneliness is somewhat unfamiliar because you’ve always had each other. So when a twin passes, the other is left unprepared. Our loyalty was steadfast and our devotion to one another, solid. Our love was unconditional no matter what the circumstances. I’m so grateful every day for the memories of the joy and laughter that we shared together. I know the bond that Kelli and I shared is impossible for anyone to replace. This memoir has become something so much more than initially intended. It’s become a documented journey barely scratching the surface of the love between two sisters. And surprisingly, it’s also become an outlet for me to speak candidly and honestly about my struggles with the cause of Kelli’s death. This is a love story turned tragedy. An exposure of one of the greatest healthcare failures killing Veterans and civilians, and a cry for help to remedy the fiasco. I’ve stressed about who I would mention in this book, nervous that I would hurt someone’s feelings by not mentioning their names. But I’ve realized that it’s impossible to do. Kelli had so many great friends, some I’ve never even met. I need each person to know who has taken the time to reach out to me in whatever capacity that if it weren’t for your heartfelt show of support and love, I don’t know that I would be able to muster the energy to even get up each day. Kelli, we did it.

Virginia Health Care: Why aren’t they listening?
In the midst of the mass media coverage that the VA Health Care System is now receiving, I’m left feeling frustrated, angry and sad. Yet on the flipside, I’m relieved. If only though…if only they had listened to me.
I wish they would have heard me as I screamed, begged and pleaded. But instead, the medications continued, even the ones that my sister consistently tried to end her life with.
In my book, Sister Surrendered, Chapter 37 details the care that my twin sister Kelli received at the VA Hospital. It’s the longest of chapters, but still only containing a mere snapshot of a much larger, troubling picture.
I sued the government after Kelli’s suicide, settling the case exactly one month before our trial date. I regret that decision, I regret it deeply. Because settling the case also meant that the government claimed no accountability for Kelli’s death, allowing the details of her care to stay silenced. Thankfully though, as long as I speak the truth, I can speak freely now.
The media’s finally paying attention and people are scrambling for answers and scurrying for the truth. But where were they when I was scrambling?  I wrote my Congressman, the local newspapers etc. I did everything that you were “supposed” to do, yet still, no one listened.
And I wonder why this is? I wonder why political figures, individuals who are able and capable of rectifying a troubled system that’s set up for our veterans, people who served our country, could turn their cheeks. Are they paying attention now simply because they have too? Is it because the nation’s watching?
It was only a month or so after Kelli’s death that I wrote President Obama, even receiving a letter back from the White House acknowledging my letter. But that was the only response, nothing else.
Waiting lists are not the only problem at the VA Hospitals; they’re simply a fraction of many. Let’s please not forget this. 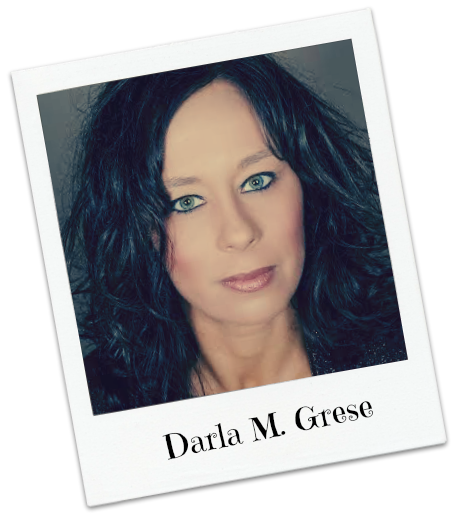 Darla M. Grese is a twin sister who lost her better half to side effects from prescribed medication. As a U.S. Navy Veteran, she is an advocate of Veteran X and Veteran Hope programs that address mental illness, PTSD, and unintentional addiction issues. Both programs are sponsored by the Veteran Affairs Medical Center and focus on Veteran recovery and independence. She raises money for “Team Kelli” and annually participates in the Out of the Darkness Walk at Mt. Trashmore in Virginia Beach (http://www.sos-walk.org/sos/).  While continuing to bring awareness to this cause, being a loving parent is her favorite passion and the main focus of her life. Darla’s love for the arts has been expressed as a talented actress with appearances in The F.B.I. files, The New Detectives, Diagnosis Unknown, Wicked Attraction, Discovery Channel’s The Haunting, and the movie Atlantis Down. She currently works full time as a respiratory therapist at a trauma center in Norfolk, Virginia.
For More Information 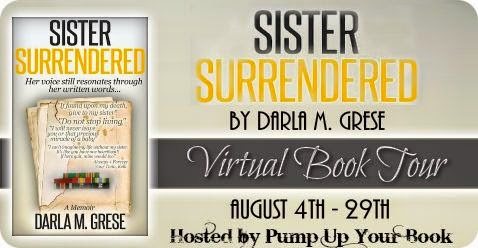