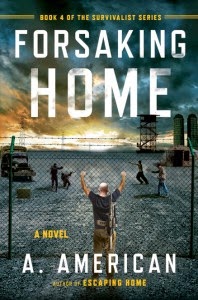 Book 4 of The Survivalist Series

They survived the collapse, but can they survive the aftermath?

Morgan Carter has weathered the weeks after the collapse of the nation’s power grid, reuniting with his family and ensuring their safety, but his struggle isn't over yet. Carter must focus on survival in an increasingly unstable society—but the challenges he faces are beyond his wildest imagination.

Meanwhile, the enclosed quarters of the nearby government-run refugee camp make for an environment where injury, assault and murder are the norm. As Jess creates trouble within the camp, Sarge and his crew plot to take down the entire establishment.

From the author of the hit Survivalist Series books, Forsaking Home is an action-packed adventure that depicts the harrowing possibilities of a world gone awry, and the courage it takes to protect what matters most.
My Review
I like this series. It is one of the better post apocalyptic series. It feels real. I know that if I was stuck I would want to hang with someone like Morgan. He is a survivalist. There is some language used in this book. I have not problems with language when it is used tastefully and for the purpose of the story. Which it is done in this book. I mean come on the world is falling about and people are being locked up by the government. You are probably not going to be very happy and might say a few bad words.
Unlike the other books in this series, I felt that this book lack a little of the sparkle that the other ones had. It felt like this book was just a lot of talking and more talking and not as much else going on. Although I liked seeing the gang again. The addition of new characters did not really do much for me. Overall, this book was my least favorite in this series.


I have 1 complete set of these books (4 books total) to give away. US/Canada only. Leave a comment with your email address. Winner picked July 20th

traveler said…
Thanks for this great giveaway. Looks fascinating. saubleb(at)gmail(dot)com
July 14, 2014 at 9:18 AM

petite said…
I would enjoy this captivating giveaway. Many thanks. elliotbencan(at)hotmail(dot)com
July 14, 2014 at 9:25 AM