A Summer in Europe is a breathtaking trip that will have you wanting to book yourself another trip with Marilyn Brant as soon as possible! 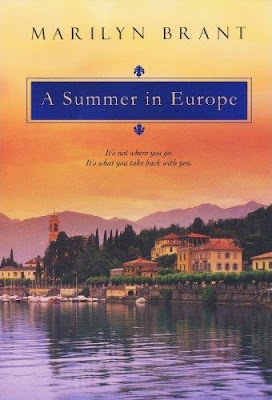 Gwen and her boyfriend, Richard have been dating for a while, Gwen has a feeling that Richard is going to propose to her on her birthday. Instead of a ring, Gwen receives a pair of pearl earrings. After Gwen’s Aunt learns that Richard did not propose to Gwen, she figures that this is the best time to tell Gwen that she and Gwen will be traveling to Europe. There is just one catch. Gwen and her Aunt will be joined by Gwen’s Aunt’s S and M club members.

While in Europe, Gwen meets Emerson. Emerson is teaching Gwen the finer things to life and all that Europe has to offer.

I enjoyed this book. It had all the things I liked about Mrs. Brant…humor, interesting characters, and a scenic location. I was laughing at the antics of Gwen’s Aunt’s S and M club. It just goes to show you that no matter what age you are, you can be into S and M (sudoku and mah-jongg that is).

In the beginning, I was not feeling Gwen so much. She was in Europe and all she wanted to do is complain and compare the dashing, and nice Emerson to douche-bag, Richard. I felt myself getting turned off by Gwen and yelling at her to let her hair down and have fun. Her Aunt and everyone else are. Thus, due to Gwen being so uptight in the beginning, I was not seeing the chemistry involving Gwen and Emerson. After Gwen did loosen up, I thought she and Emerson made a cute couple. A Summer in Europe is a breathtaking trip that will have you wanting to book yourself another trip with Marilyn Brant as soon as possible!
Marilyn Brant